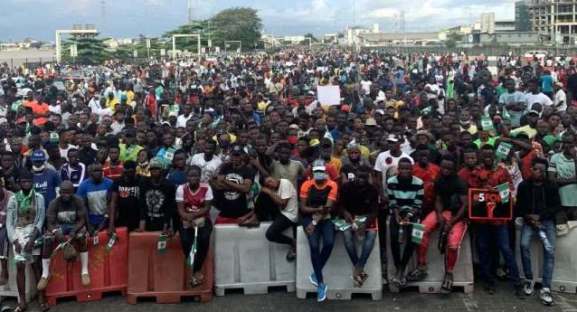 The Northern Youth Leaders Forum has alleged that the second wave of #EndSARS protests was designed to pave the way for a coup and possible disintegration of the country.

NYLF Chairman, Elliot Afiyo, made the allegation while addressing newsmen in Yola, the Adamawa state capital on Tuesday, December 8. Afiyo said the youth group, an umbrella body of 42 northern youth groups, came to this conclusion at the end of the National Executive Council meeting of the body in Gombe.

He said the group was prepared for a violent confrontation with #EndSARS protesters in any part of the North.

“From the intelligence reports we received from our zonal and state coordinators and also from some of our members in the security circle, the second wave of these protests as planned by their sponsors, should not be allowed to take place in any of the northern states and Abuja.

We are in possession of credible intelligence reports which shows that, the sponsors of these protests have strategised to bring down completely the already recessed Nigerian economy so as to give way for a military takeover and final disintegration of the country which we considered and truly too, unacceptable.

To this end, we want to sound a serious warning to the organizers and all their sponsors to discontinue their plans and embrace dialogue or face whatever consequences as a result of the protests.

All our zonal and state chapters are fully mobilised and prepared for violent confrontation with the protesters in any part of the North and Abuja.”

The group said if the protesters feel dissatisfied by the government’s performance, they should wait till 2023 to vote them out.