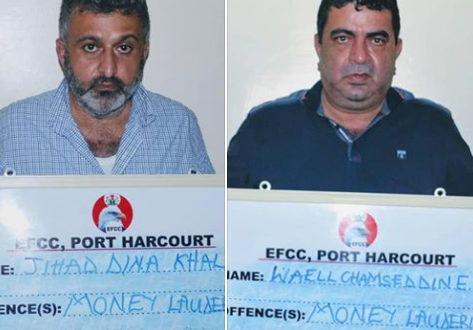 A federal high court in Rivers has sentenced two Lebanese citizens to a prison term of two years each for attempting to smuggle $890,000 out of the country.

The duo – Chamseddine Waell Mohammed and Dina Jihad Khali were sentenced after they pleaded guilty to charges filed against them by the Economic and Financial Crimes Commission (EFCC).

Mohammed and Khali’s offences are in violation of section 2 (3) of the money laundering (prohibition) act 2011 (as amended) and punishable under section 2 (5) of the same law.

They were arrested at Port Harcourt International Airport, Omagwa, last week, while onboard a chartered flight to Lebanon.

At the court on Thursday, Aso Larrys Peters, EFCC counsel, tendered some documents, which included a letter of invitation by customs and statements of the defendants, as exhibits.

Macaulay Olayinka, a police officer and witness of the anti-graft agency, said the money recovered from the suspects had been deposited with the Central Bank of Nigeria (CBN).

“They were apprehended by the Nigeria Custom Service, Area One Command, Port Harcourt and handed over to the Port Harcourt Zonal office of the EFCC on August 12, 2020 for further investigation,” Olayinka said.

Thereafter, Peters asked the court to sentence the defendants.

Paul Ejiga, counsel to defendants, prayed the court to be lenient in its sentencing, arguing that his clients do not have a criminal record.

Subsequently, I. M. Sani, the judge, sentenced to two years imprisonment with an option of fine of N1 million each.

Sani ordered that the money be forfeited to the federal government.