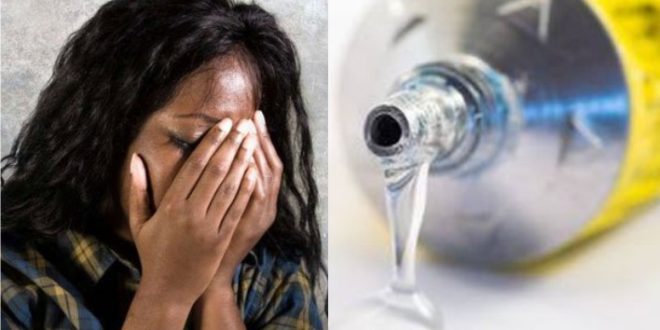 A manhunt has been launched for a man who sexually assaulted his wife after accusing her of infidelity on Saturday May 16.

The  incident took place in Tharaka South Sub-County in Kenya and was reported by the woman who narrated to the police how her husband forced her to strip naked by the riverside before he started interrogating her.

According to the victim, her husband arrived home and demanded to know how many men she had slept with while he was away.

Tharaka South Police Commander Kiprop Rutto said the suspect from Kamatungu first inserted pepper, salt and onions in his wife’s private parts using a sharp knife before applying superglue mixed with sand to ‘seal’ it off.

Mr Rutto said the suspect, who is still at large, reportedly returned home from Nairobi on Saturday night and told his wife that they had to shift from their home to another location to avoid being arrested for leaving Nairobi area which is under lockdown due to Covid-19 pandemic.

He said the two left home but on reaching the Kathita River, the man, who threatened to kill the woman, ordered her to undress.

The victim told the police that no sooner had she started undressing, than her husband started beating her up. The suspect is said to have ordered the woman to name all the men she had slept with while he was in Nairobi

After sexually assaulting her, he also sealed her ears and mouth with the mixture of superglue and sand and left her at the scene in critical condition.

The woman managed to walk to Marimanti Police Station where she reported the matter before she was rushed to Marimanti Sub-County Hospital where she is receiving treatment.

Mr Rutto said the suspect is a known criminal in the region who is being sought by police for various crimes.

“We are looking for the suspect so that he can be charged with sexual assault,” he said.

Kamatungu residents have condemned the incident and urged police to ensure the suspect faces the full force of the law.

“The suspect has been committing various crimes including theft but we least expected him to do such a horrible thing,” said Mr John Mutegi.

Previous Man severs ears of his 10-year-old son, burns his fingers for stealing his money
Next Dokpesi And His Son Clash Over Comment On COVID-19