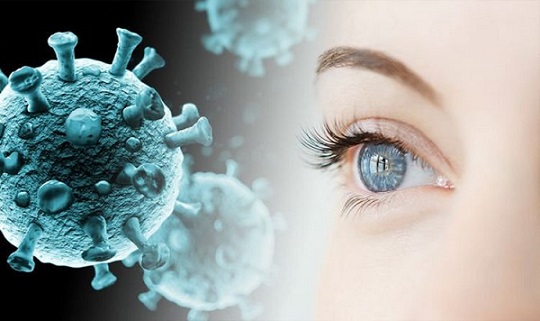 Coronavirus can enter the body through the eyes, study says

Scientists have claimed the coronavirus can enter the body through the eyes after finding they contain a protein used by the infection to bind to cells.

The coronavirus – scientifically called SARS-CoV-2 – latches onto ACE-2 receptors, known as the ‘gateway’ into cells inside body.

These receptors are found in the respiratory tract and the lungs, which is where the virus first infiltrates cells, as well as other organs.

A team led by Johns Hopkins University School of Medicine have now found the eyes produce ACE-2, making them a target for the virus.

“Ocular surface cells including conjunctiva are susceptible to infection by SARS-CoV-2, and could therefore serve as a portal of entry as well as a reservoir for person-to-person transmission of this virus,” lead researcher Lingli Zhou wrote in the study published on bioRxiv.

The researchers studied 10 eyes from people who did not die of COVID-19 and discovered that ACE2 was present in all of them, including the cornea, inside the eyelids and in the white of the eye, according to the news outlet.

“Infection of ocular surface cells could lead to the eye as being an important carrier, with ocular virus shedding constituting a significant mechanism for infection of other individuals,” the scientists said.

“Our study therefore highlights the importance of safety practices in the general community to prevent infection and spread (hygiene, face masks) and need for extra caution among ophthalmologists.”

The study suggests that if droplets from an infected person’s sneeze or cough were to reach the eye’s tissue, the pathogen could begin infiltrating cells there.

This may be why some patients have developed conjunctivitis, an inflammation of the eye that causes it to become red and infected, the Express reported.

Doctors first claimed the virus could be spread through the eyes in January, when the epicenter was still in Wuhan, China.

Dr. Wang Guangfa said at the time that he believed he had been infected because he had not been wearing protective goggles, the Express reported.

Several days before experiencing pneumonia, the Peking University respiratory specialist observed that his eyes were red.