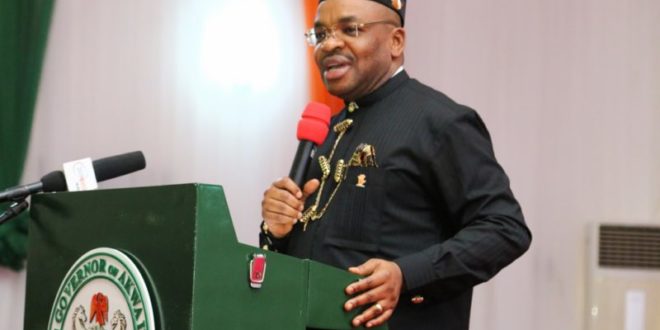 Governor Emmanuel Udom of Akwa Ibom state has said the 1, 800 bags of rice donated to his state by the Federal government as palliatives to cushion the economic impact of the Coronavirus pandemic, may not be suitable for consumption.

The governor stated this in a press conference he held in the state capital, Uyo, on Monday April 27. He announced a decision to subject the rice to scientific test  to ascertain whether such should be distributed to the people of the State.

“The only palliative we have gotten from the Federal Government is 1,800 bags of custom bonded warehouse rice. As I am taking to you, the rice is in the warehouse. It is a gift. We have sent it for test and until the test result is out, we will not distribute it to our citizens. It is not good for consumption,” he said.

The Minister for Humanitarian Affairs, Sadiya Umar-Farouq, has however denied claims that the rice sent to some states were in bad condition. According to her, NAFDAC certified the bags of rice before they were distributed.

”As you may recall, we mentioned here that we distributed the rice relief to the states. The rice was handed over to us by the Nigerian Customs Service and it was assessed by NAFDAC who issued a clearance before the goods were released for onward distribution to the states.

So, as far as we are concerned, the rice was certified fit for human consumption. We had an issue in Oyo which was officially reported this morning but two or three days ago, we saw news flying around that all the rice that we took to the southwestern part of the country were bad and that Lagos had taken its delivery to the lagoon and other states have rejected theirs.

I want to say very categorically that it is fake news. It is not true. This afternoon, I spoke with the Chairman of the Nigerian Governors Forum, Governor Kayode Fayemi and he assured me that the one he received in Ekiti and other states are in good condition.” she said