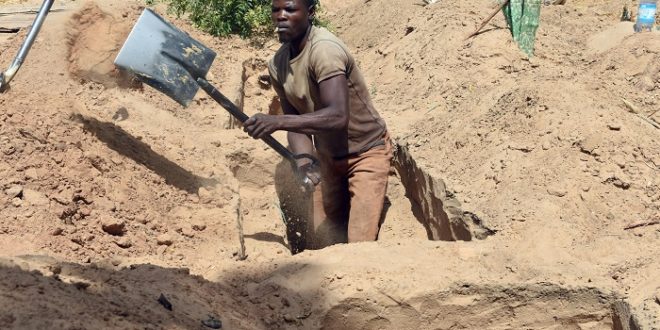 Nigerians have taken to social media to express worry over alleged mysterious deaths in Kano state which has reportedly risen to 640 in one week.

Though the state was on lockdown for 7 days, it was recently relaxed for a day by Governor Umar Abdullahi Ganduje following the declaration of Ramadan.

While the mysterious disease killing people in the state has been linked to Coronavirus by many, others have countered it and also pointed out that it may be something else.

A health worker who spoke to The Cable said there is a high level of suspicion that top government officials in the state have been exposed to the virus.

“Things are in disarray here, and there is no well structured response to COVID-19. The government is not communicating. They are not testing, and people are dying. We have had people coming here to hospital and when they died, they are immediately buried without taking samples for testing.

“This is not a rumour. People are dying. The suspended test centre was fumigated days ago, and normally it should take 48 hours but as of today, it has not been reopened. They said this is because of the shortage of reagents.” 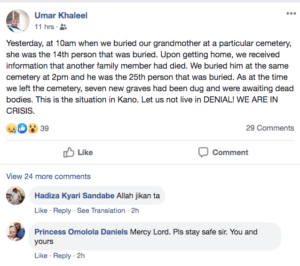 Nigerian doctor and Twitter user, Dr Olufunmilayo claimed that 640 people have died in Kano state in the last 7 days.

For those who think it is IMPOSSIBLE for Coronavirus to kill 640 people in one week in Kano, Let me remind you of a few things; Kano (and Nigeria as a whole) has not tested as much as it can/should, 813 people died today in UK- just today; Please NEVER underestimate this virus. 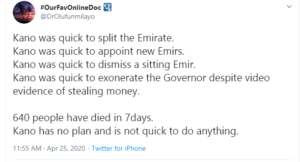 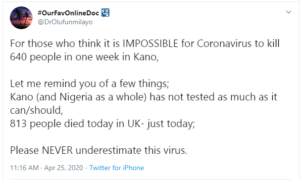 Mubarak Umar, an Abuja/Kano based journalist also tweeted about over 10 prominent people dying in Kano state in the last 24 hours. 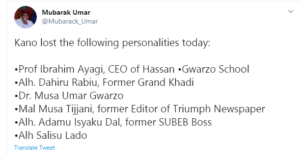