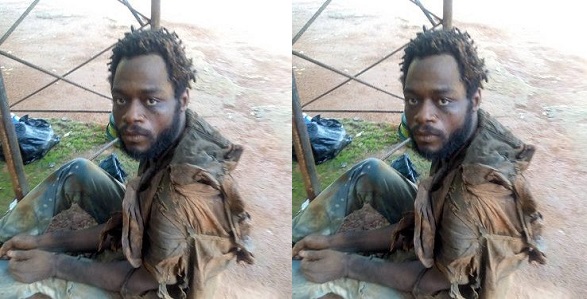 A 37-year old mentally challenged man identified as Chigorom Ezeofor, pictured above, has been arrested by men of the Anambra state police command for allegedly killing his father in Unuchiana village, Aguata Local Government Area of the state today April 25.

The police spokesperson, Haruna Mohammed who confirmed the incident, said men of the Aguata police station on Saturday at about 9am, received a report from one Timothy Ezeofor that his 70-year-old elder brother named Godwin Ezeofor was allegedly murdered by his 37 year old son, Chigorom Ezeofor using an Axe. Timothy added that the suspect has been mentally ill for the past eight years.

Following the report, officers attached to Aguata Division led by the DPO CSP Ayeni Oluwadare, mobilised to scene, took photographs of the victim and rushed to the hospital where he was certified dead by a medical doctor and the corpse deposited at the Hospital’s mortuary for autopsy.

The police spokesperson added that exhibit were recovered and the suspect who “looked insane” was arrested and taken to the station for discreet investigation to ascertain circumstances surrounding the incident.

There’s “no evidence” coronavirus survivors can’t be reinfected, WHO says