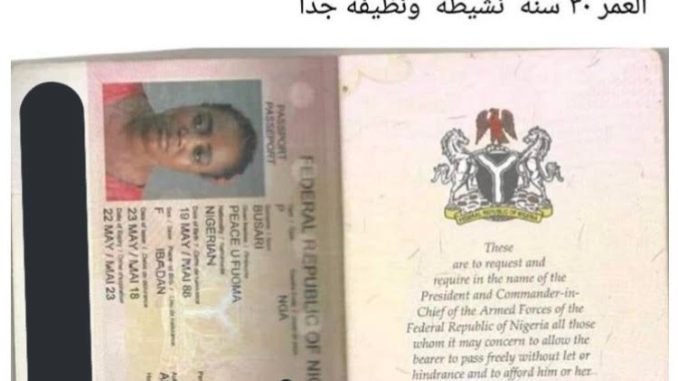 A Lebanese, identified as Jerro, on Tuesday, announced the sale of a Nigerian woman on Facebook.

Jerro, who resides in Beirut Lebanon, sent in an image alongside the data page of the 30-year-old Nigerian, Peace Busari Ufuoma on a Facebook group called ‘Buy and Sell Lebanon.’

He also placed a $1,000 bill on the domestic worker, saying the Nigerian was very active and very clean. 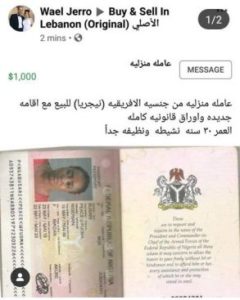 Busari’s passport which was acquired in May 2018, indicates that she hails from Ibadan, Oyo State.

The incident, which generated diverse reactions, was brought to light by an Instagram user, @thereneeabisaad, who called on the Nigerian government to save the victim.

Reacting, the Chairman, Nigerians in the Diaspora Commission, Abike Dabiri-Erewa, while confirming the incident, on Twitter, said the case has been reported to the Nigerian mission in Lebanon, adding that a manhunt for the culprit has been launched.

She said, “The Nigerian mission in Lebanon has since reported to the host authorities.

“A manhunt is on for the man and all out search for the young girl. Let’s keep her in our prayers.”

Six Chinese convicted for escaping from COVID-19 quarantine in Uganda