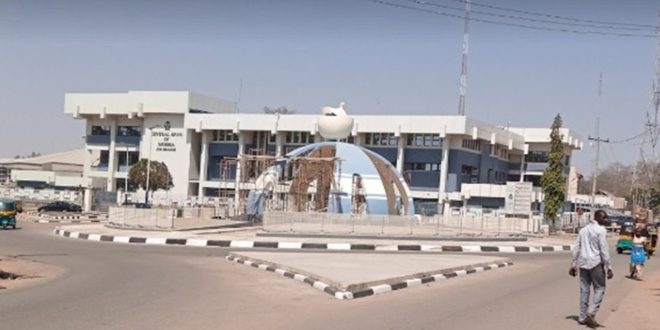 There has been a fire outbreak at the Jos branch of the Central Bank of Nigeria in Plateau State.

The fire, which broke out on Tuesday, April 21, has been brought under control, the CBN revealed via its official Twitter account.

A statement signed by the Bank’s Director of Corporate Communications, Isaac Okorafor, indicated that at about 9.15 a.m., on Tuesday, April 21, 2020, the fire alarm in CBN Jos Branch was triggered and in line with the Bank’s fire drill and protocol, the skeletal staff on essential duty were promptly evacuated from the building to the muster point.

Okorafor further stated that the Branch Controller quickly called the Fire Service at about 9.19 a.m and noted that before their arrival, the Bank’s security staff, relying on information from the Fire Alarm Dashboard, traced the fire to an air conditioner installed in the inverter room on the second floor of the building.

The staff swiftly put out the fire with extinguishers and hydrants installed in the building.

The affected room has since been cordoned off for further investigation, while normal work has resumed at the branch, Okorafor stated.

He assured the general public that the minor fire has been effectively put out and no damage was done to any records of the Bank.

The fire at CBN is the latest in the series of fire outbreaks that have hit key government offices in the country in recent days.

On April 8, there was a fire at the Treasury House, a building housing the Accountant General of the Federation’s office. A week after that, there was another fire outbreak at the headquarters of the Corporate Affairs Commission. Days after that, the Independent National Electoral Commission’s office in Abuja also went up in flames days after.

Previous MADAGASCAR PRESIDENT UNVEILS A LOCAL HERBAL REMEDY THAT CAN ALLEGEDY CURE CORONAVIRUS
Next Comedian, I Go Dye, donates his mansion to the Federal government to be used as an Corona Virus Isolation center