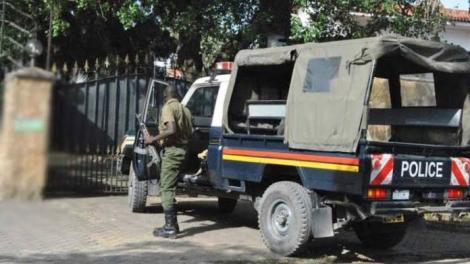 Police in Kenya have arrested three politicians alongside many others who were partying at various locations in the country during the Coronavirus lockdown.

Police said they first arrested six people on Saturday after they broke up a private party being hosted at the Viraj Villa in Kileleshwa, Nairobi.

The six were apprehended after neighbours called the authorities to report that the house party had been going on for hours.

In Nyeri County, three lawmakers were arrested after police raided a house were they had locked themselves inside in Kingongo area. The three were part of 17 revelers who were apprehended at the house which they had reportedly converted into a club, following a tip-off from members of the public.

In another raid in Kilimani, police also arrested a number of people who were holding a party at an apartment on Menelik Road.

Confirming their arrest, Nyeri Central Sub County Police boss Paul Kuria said all the suspects, including the lawmakers, would be charged in a court of law over their actions, “The law applies equally to everyone. Regardless of their rank senior or junior, rich or poor. It does not matter who they are, they will face the law.

“We are going to ensure that the law is applied equally anyone found flaunting the curfew will be dealt with,” stated Kuria.

Last month, President Uhuru Kenyatta announced an indefinite ban of public gatherings and imposed a 10-hour nationwide daily curfew running from 7pm to 5am in order to halt the spread of COVID-19.

Previous 68-year-old woman welcomes twins, as first time mother, in Lagos hospital
Next How Abba Kyari’s health reportedly took a turn for the worse hours before he was to be discharged