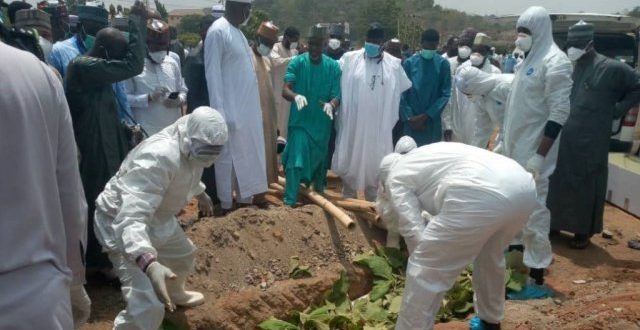 The Chief of Staff to President Muhammadu Buhari,  Abba Kyari, who died on Friday, April 17th, has been buried amid a violation of the social distancing order of the federal government.

The Nigeria Center for Disease Control has expressed deep concern after its guideline on social distancing to curb the spread of Coronavirus in the country was broken on Saturday by a large crowd, which turned out for the burial of Chief of Staff to President Muhammadu Buhari, Abba Kyari.

Kyari, who had a history of diabetes and was in his 70s, died at a private hospital in Lagos on Friday owing to complications from Coronavirus.

He contracted the deadly virus after trips to Germany and Egypt where the pandemic had claimed hundreds of lives.

Though senior government officials including President Buhari, Vice President, Yemi Osinbajo, ministers, lawmakers and leading members of the ruling All Progressives Congress all shunned the burial for fear of contracting the virus, a large crowd of sympathisers still turned out for the burial, which took place at the Defence House in Abuja without protective gears, thus exposing themselves to the virus, which has already infected 493 persons and killed another 18.

In a post on Twitter, the NCDC said, “Even at this time, as we mourn loved ones lost to COVID-19, including the recently deceased President’s Chief of Staff, Mallam Abba Kyari, we need to refrain from attending mass gatherings to prevent the further spread of #COVID-19.” 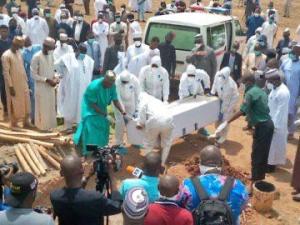 According to a former Chairman of the National Human Rights Commission, Prof Chidi Odinkalu, the movement of Kyari’s body from Lagos to Abuja for burial was in contravention of an earlier position by government, which stated that bodies of Coronavirus victims will be cremated and not released to their families for burial.

Odinkalu said, “First, @FMICNigeria told us that bodies of victims of #Coronavirus can’t be claimed, until @NGRPresident claimed its own.

“We were told we should not gather more than 10 but @NGRPresident gathers more for #LiveTV.

“We were told to keep #SocialDistance. Now, this?! Rules mean nothing?”