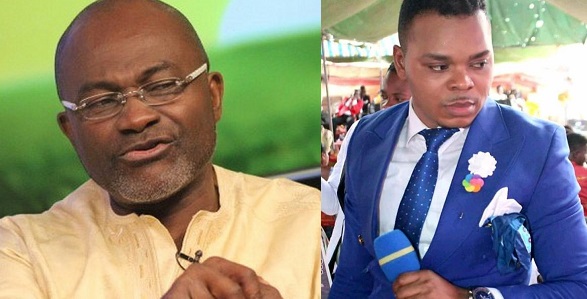 The infamous beef between Ghanaian Legislator, Honourable Kennedy Agyapong and self-acclaimed Angel of God, Bishop Daniel Obinim is not showing signs of abating anytime soon as the MP has made fresh allegations against the pastor.

Hon. Kennedy Agyapong, who is the Member of Parliament for Assin Central in Ghana,  made the new allegations in an interview on Net2 Tv’s “The Seat” show.

Hon. Agyapong launched the fresh attack after Obinim’s wife, Florence Obinim defended her husband while reacting to the allegations the legislator made against him weeks ago.

Hon Agyapong said to Obinim back in March,  “If you have the power to heal why have you not heal your own father up till now? You are a Fool!! He is suffering on the sickbed with leg rotten and you seem to care less about that. Nobody should step in I will deal with him”

Kennedy Agyapong also claimed that Bishop Obinim and his Junior Pastors have been sleeping with their female Church members. He also alleged that the popular Bishop scammed his female member.

After Florence Obinim defended her husband, Hon. Agyapong reacted in a new video by attacking the Bishop’s wife and calling her a “foolish woman”.

In fresh allegations by the MP, he stated that Bishop Obinim has had an affair with the blood sister of his wife Identified as Jemima. He also mentioned that because of his affair with her, he was able to use his wife to stop the marriage ceremony between Jemima and her suitor. Hon Kennedy Agyapong added that, Bishop Obinim also forced Jemima to have a abortion for him to hide his acts from the public.

The MP also accused the Bishop of sleeping with his junior Pastor’s wife. According to the MP, the junior Pastor, known as Saviour, personally narrated to him the issues which necessitated his departure from Obinim’s Church to join his supposed rival, Reverend Obofuor.

The honourable MP showed alleged conversations between Obinim and Pastor Saviour in which he (Obinim) threatened him (Saviour) with death. The MP promised to bring the man himself on TV to narrate his story if Obinim denies his allegations.

Reacting to the allegations from the MP, Bishop Obinim, who is the head pastor of God’s Way International Church, stated that all the claims by Kennedy Agyapong are lies.

Obinim added that henceforth he is not going to engage the legislator further, neither will he respond to any of his allegations.