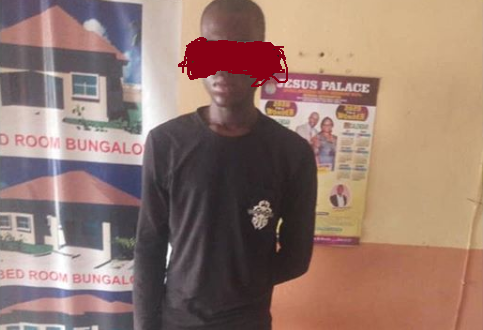 NSCDC Arrests Poly Student Over Rape Of Teenager In Ondo

An undergraduate student of Federal Polytechnic, Ado-Ekiti, Femi Adejuwon has been arrested by operatives of the Nigeria Security and Civil Defence Corps (NSCDC) for allegedly raping a 16-year-old student.

The NSCDC State Commandant, Philip Ayuba who confirmed the incident said the suspect who is an undergraduate student of the institution’s Accountancy Department, raped the girl at his friend’s apartment on Sunday April 12.

“Information reachching us from concerned citizens in Ijoka Area, Akure, on Sunday, April 12, 2020, made us know that a 16-year-old student, who is currently awaiting admission, was allegedly raped by one Femi Adejuwon, an undergraduate of Accountancy Department, Federal Polytechnic Ado-Ekiti.

“The victim narrated her terrible ordeal after being discharged from the Police Clinic, Akure.

“She said that the suspect called her on phone to meet him in his friend’s place. On getting there,   Adejuwon took her inside the room, shut the door and raped her.

“She was later rescued in a pool of her blood”

Femi reportedly confessed to the crime but blamed the sad act on the devil. Investigation is still ongoing and the suspect would be charged to court after it has been concluded.

Previous Urban poor with less than N5,000 to benefit from Conditional Cash Transfer – Minister
Next FRSC reacts to viral video of lady who was almost assaulted by one of its officials for speeding off with policeman on her car’s bonnet