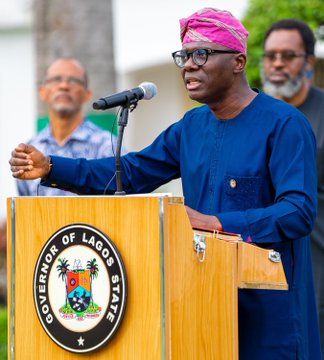 Governor Babajide Sanwo-Olu has reacted to the unrest witnessed in the last few days in some Mainland communities of Lagos state.

Speaking to newsmen after an emergency Security Council meeting in which all the various heads of the state security agencies were present, Sanwo-Olu said over 100 suspects have been arrested in the last 72 hours on account of disturbances.

Sanwo-Olu accused the miscreants of being opportunistic criminals who are taking advantage of the lockdown order in the state to unleash mayhem.

”Over 100 suspects have been arrested in the last 72 hours on account of disturbances. All the suspects have accordingly been charged to court.

”Those miscreants that you may have seen in the videos going viral are not hungry people. They are opportunistic criminals and will be treated as such by the law enforcement agencies.”

Governor Sanwo-Olu disclosed that the state was in constant communication with the Federal Government on the security issue, and he also confirmed the deployment of DIG Peter Ogunyanwo as the Intervention Squad Coordinator to curtail and stem the perceived and actual threats of violence in Lagos.

”With this revised strategy, you will see an increase in mobile police deployment in all trouble spots in the metropolis; as well as the police intensifying their patrols around residential areas, boundary communities and other critical areas of activities during this lockdown period.

”This will also be carried out in conjunction with other security agencies – Army; Navy; Airforce and Directorate of State Security Service.”

Today, the state security council met to address the increase in armed robberies and unrest in boundary communities. We have received increased help from the IG of Police with a special force already addressing the elements breaching the peace in the affected communities.

We have the responsibility of ensuring the security of the lives and properties of all residents in Lagos. We will not abandon this responsibility at any time. We will definitely see an increase in mobile police deployment in all trouble spots across the metropolis.

Our security agencies will intensify their patrols around residential areas, boundary communities and other critical areas of activity during this lockdown period. I urge all residents to cooperate with them and thank you for your resilience during this extraordinary time. 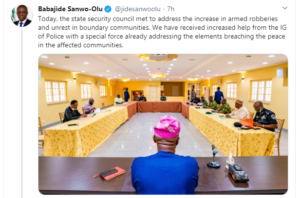