Three suspects have been arrested by the operatives of the Rapid Response Squad of the Lagos State Police Command, for robbing stranded commuters amid Coronavirus lockdown in the state.

The suspects who robbed stranded passengers in a vehicle around Oshodi of their money amounting to N10k, and also stole their phones, were tracked to their hideout.

STAY AT HOME: These three lot were caught early this morning by police officers for robbing stranded passengers in a vehicle late last night around Oshodi. They dispossessed the occupants of their money amounting to 10k and stole their phones (Samsung A70 and Samsung 7A+). 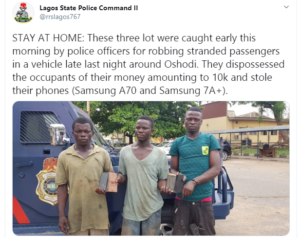