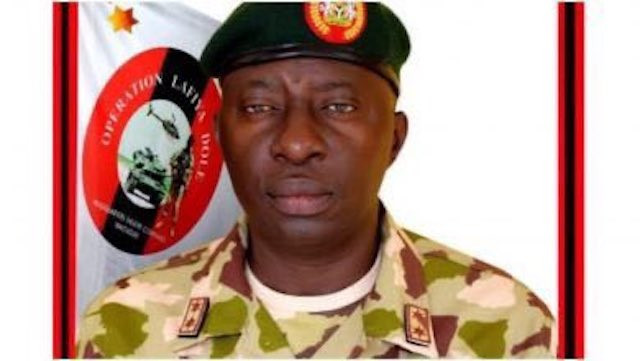 The Theatre commander of Operation Lafiya Dole, Major General Olusegun Adeniyi has been sent back to school as a research fellow at Nigerian Army Resource Centre(NARC) in Abuja, few days after a video of him complaining about Boko Haram insurgents having more ammunition went viral.

Major General Faruk Yahaya who was the general officer commanding (GOC) of the army’s 1 division in Kaduna, has been deployed to replace Adeniyi who has been in-charge of Operation Lafiya Dole since 2019.

While Nigerian Army’s spokesman, Sagir Musa said the new postings was a routine exercise intended to reinvigorate the system for greater professional effectiveness and efficiency, social media users insisted that Adeniyi’s deployment was a vindictive move by Buratai because Adeniyi told him an embarrassing truth.

Read the full statement announcing the new postings below;

In the rekindle spirit of professionalism, the Nigerian Army has released the postings and appointments of some affected senior officers.

The posting which was approved by the Chief of Army Staff (COAS) Lt Gen TY Buratai is a routine/normal exercise intended to reinvigorate the system for greater professional effectiveness and efficiency.

All the postings and appointments take effect from the 1st of April 2020.

While wishing all the officers well in their respective appointments, the Chief of Army Staff enjoins them to take their new responsibilities/appointments seriously and discharge all duties professionally with utmost loyalty to the Nation and the Service.