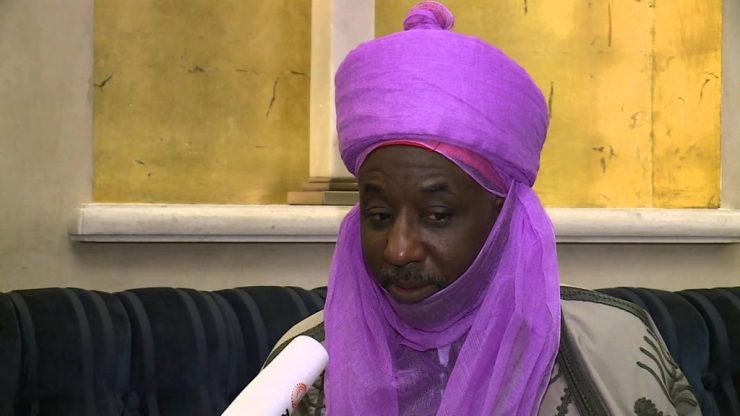 Sanusi Lamido Sanusi has opened up on how he was allegedly manhandled by security agents from the police, DSS and others in their effort to force him out the Emir palace and banish him to Nasarawa state after his dethronement by the Kano state government.

The former Governor of Central Bank of Nigeria who insisted that he wasn’t given a fair hearing before being dethroned in the lawsuit he filed on Thursday March 12 to challenge his detention and confinement in Awe, said that he was harassed and forced out of the palace without being allowed to pick up his personal belongings.

Sanusi accused the Kano State Commissioner of Police of putting out an order for him to be flown to Abuja without his family members in another aircraft.

The deposed Emir’s Chief of Staff, Da Buram Kano said in an affidavit attached to the lawsuit;

“I verily believe the state government purportedly removed the applicant from office as the Emir Kano on March 9, 2020 without any basis or justification whatsoever and was not given any hearing on any allegation on which his removal was predicated.

“The applicant is however, not challenging his removal as Emir of Kano in this suit.”

“Sanusi’s forcible relocation from the Palace of the Emir of Kano to Abuja, and later Nasarawa State, he has not been able to meet or unite with his wives, children, relatives and friends and that his rights have been severely curtailed.

“I know for a fact that the CP  refused the applicant’s requests for  protection and to carry his family with him to Lagos and stated that he had no such instructions from above, but instead directed that the applicant be flown to Abuja and then  taken to Nasarawa State.

“In order not to jeopardise his safety or the safety of any member of his family or indeed other persons around, the applicant cooperated and proceeded in the vehicles provided by officers under the command of the respondents.

“They said the Commissioner of Police, along with other officers under the command of the respondents, harassed and rushed the applicant out of the Emir Palace, Kano, without letting him take any personal belongings and personal effects, along with him as they took him into their waiting vehicles.

“The applicant was then taken in company with loads of armed men, being officers under the command of the respondents, to the Nigerian, Air Force Base in Kano where he was put in a private aircraft to Abuja and departed Kano at about 6.40pm.

“The applicant was separated from his family who were also carried out of the palace.

“Upon arrival at the Nnamdi Azikiwe International Airport, Abuja, he was conveyed first to Lafia, then to Loko area of Nasarawa State, after being driven  for about seven hours in the dead of the night.

“That the applicant is personally being detained in Nasarawa State by agents of the first and second respondents (IG and DG of the DSS), purporting to carry out the orders of the third and fourth respondents (Muktar and Malami).

Sanusi also asked the court to order the respondents to pay him N50m as damages for the unlawful and unconstitutional arrest and detention, and also publish an unreserved written apology in at least three national dailies for a breach of his fundamental human rights.

The dethroned monarch also sought for a restraining order against the respondents and their agents from banishing him from Kano or any other place of his choice, which according to him will be a violation of his fundamental right to reside in any part of Nigeria.

Recall that Justice Anwuili Chikere of the Federal High Court in Abuja ordered the immediate release of dethroned Emir of Kano, Sanusi Lamido Sanusi from confinement/detention in Awe community in Nasarawa state on Friday March 13. The case was subsequently adjourned to March 26 for further hearing.

Bill Gates steps down from Microsoft board to focus on philanthropy

Nigerians Should Be Thankful They’re Not Crossing Borders To Look For Food Under Buhari – Presidential Aide, Femi Adesina | Aproko Nation