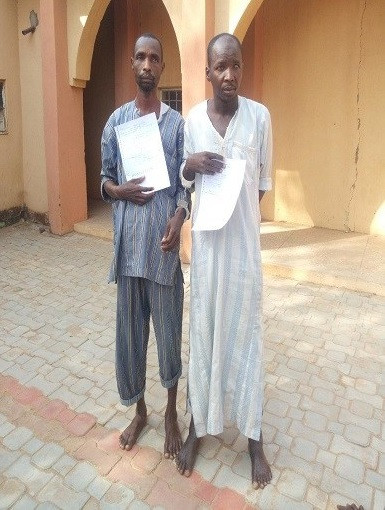 The  Zamfara State Police Command have arrested two persons for issuing a letter threatening to attack residents of Gyalange village in Gummi Local Government Area of the state, within three days if they give them N3million.

Parading the suspects at the Command headquarters, the state Police Commissioner, Mr Usman Nagogo, said the letter was pasted at the residences of the village head and the ward councilor.

“In the letter, the residents were asked to raise N3 million within three days or the whole community would be wiped out. A phone number was inscribed through which contact would be made to deliver the said amount of money,” said the CP.

“On the strength of this, using the phone number written in the letter, the police went on manhunt of the suspect and was eventually arrested and he perpetrated the crime in concert with his accomplice identified as Auwal Hassan. The arrested suspect, Bello Sani, was one time a well to do individual in the community, but when his fortune dwindled, he decided to raise capital from the same village he came from and the dwellers of the community using threats,” he added.

The suspects would be charged to court as soon as investigation is completed.