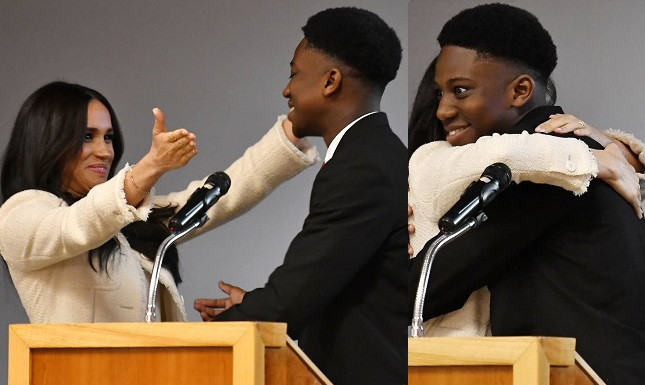 A Nigerian teenager, Aker Okoye who made headlines after he hugged Meghan Markle during her surprise visit to his east London school, has written a letter to Prince Harry to apologize for “cuddling” his wife.

The Dutchess visited the Robert Clack Upper School in Dagenham on Friday to mark International Women’s Day, in what was her final solo engagement as a working member of the Royal Family, but it was the star-struck Aker Okoye who stole the spotlight when he leaned in to give the Duchess a hug – much to the amusement of his classmates. 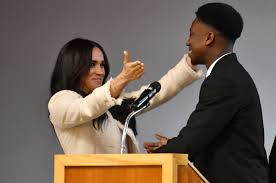 Okoye who is the head boy of his school, received a rapturous applause when he bounded on stage to embrace the Duchess of Sussex after she asked if anyone wanted to give a speech.

While speaking on stage, Okoye greeted Meghan and told his fellow pupils: “She really is beautiful. I had to speak the truth there.”

Speaking with The Sun, the 16-year-old who revealed that it was ‘the best day of his life so far’ told the news outlet: “I’ve written the letter to make sure Harry doesn’t have a problem with it and to say sorry really and that I hope he didn’t mind. 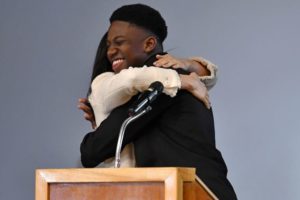 “Meghan found it funny and I’m sure Harry will as well. When she asked which brave young man wanted to do a talk I jumped at the chance.

“I leapt up there. I thought it would be proper protocol to give her a cuddle. It’s all a blur.”

According to Okoye, he was “starstruck” by the opportunity “to speak in front of someone so famous and important.”

In the letter, published by The Sun, Okoye said;

‘Dear Harry and Meghan. Harry, hope you don’t mind me writing this letter,’ he wrote. 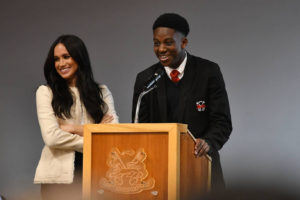 ‘I hope you didn’t mind me cuddling your wife. I was just overwhelmed and shocked to see her arrive at my school.

‘It was a pleasure to hear her speech and to speak in front of her as well. She is truly inspirational.’

Okoye also told the Sun that he was ‘thankfully single’ as he had ‘no idea’ how a girlfriend would have reacted to his encounter with the Duchess. 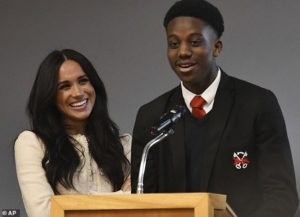 The teenager also said he hoped to meet Harry one day, and wished the royal couple “good luck for the future” as they step back from senior royal duties.

Volunteers to be infected with coronavirus for £3,500 in bid to find vaccine