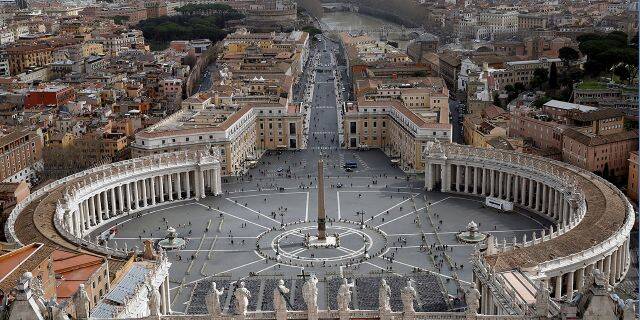 The Vatican has reported its first case of coronavirus today – days after Pope Francis tested negative for the virus.

The discovery takes the epidemic to the city-state surrounded by Italy, which has confirmed more than 3,800 cases and 148 deaths due to the virus.

Vatican spokesman Matteo Bruni said the new case was diagnosed on Thursday and that services in Vatican clinics had been suspended to deep clean the areas.

Most Vatican employees who use its health services live in Italy, on the other side of the border with the 108-acre city-state.

Bruni gave no details on whether the person who tested positive was such an employee or was among the few clergy and guards who live inside its walls.

The Vatican said it is working with Italian authorities to keep the coronavirus from spreading, with a suspension of Pope Francis’ weekly audiences likely.

It was revealed on Tuesday that a member of staff in the Vatican had been placed in quarantine over fears they may have contracted the disease.

The worker had come into contact with a French priest who has since been hospitalised in Paris, and has been placed in isolation as a precaution.

It is unclear whether the two cases are related.

The confirmation of the Vatican’s first coronavirus case comes days after Pope Francis tested negative for the virus.

The pontiff, 83, had been forced to cancel a series of engagements last week due to an illness described ‘as a cold’.

He was given a ‘routine’ test after falling ill on Ash Wednesday with symptoms including a cough, fever, chills and sore throat.

He was given a swab test as a precaution but the Vatican said Pope Francis, who cancelled a Lent retreat for the first time in his papacy, is suffering only from a cold that is ‘without symptoms related to other pathologies.’

Hushpuppi denied bail in the US