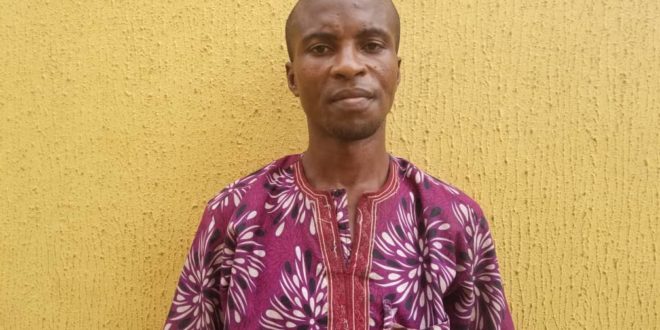 Lagos State Police Command has arrested a 45-year-old Celestial Pastor, Ejiro Ologonla, for being in possession of a missing man’s phone, money and trousers.

The police said on December 20, 2019, about 10:30am, it received a complaint that on December 12, 2019, about 2pm, Olatunfe Anthony Oluwafemi, living at No. 27 Owode Street, Alapere Ketu, who was sent on an errand to Ilupeju, did not return and his whereabouts unknown. All efforts by his family members to locate him, were futile.

The state Police Public Relations Officer (PPRO), a Deputy Superintendent of Police (DSP), Bala Elkana, said: “The Itel phone of the missing person was electronically analysed by Police Forensic Experts, leading to the arrest of the user of the phone. The user is a 23-year-old lady identified as Monsurat Gbadegeshin.

“It was learnt that Monsurat’s fiancé, Abiodun Abiola, 30, gave her the phone. This led our detectives to arrest Abiola. During interrogation, Abiola mentioned that Tolu Olurotimi, 20, sold the phone to him. He led police to arrest Olurotimi. Also, while being quizzed, Olurotimi said he bought the phone from Pastor Ejiro Ologonla.”

Ologonla, from Delta State, based in Lagos, reportedly said: “I was at Oniru Beach for spiritual cleansing on December 20, 2019, about 10:30a.m, when I met a young man named Oluwafemi. When I saw him on the fateful day, he appeared drunk. He was chasing people around. At a point, I saw him climbing a fisherman’s boat. Later I saw him pulling off his clothes and shoes. He dropped his phones and jumped into the sea. I informed the security men on duty at the beach and also called a police officer as well as Princess Arike Oniru on the phone to intimate them of the incident. After which I picked up the victim’s clothes, shoes and phone. I sold the phone to Tolu Olurotimi for N1, 500 only.”

The fisherman, Princess and other witnesses mentioned by Ologonla, were invited for questioning. The fisherman stated that on the fateful day, Oluwafemi came to the beach, behaving as if he was drunk.

As he paddled the canoe to the sea, he was alerted that the man was hanging on the canoe. He brought him back and promised to give him fish. But when he came back the following day, he did not see the man. Princess confirmed that Ologonla called to inform her that somebody jumped into the sea. She advised him to report the incident to the nearest police station.

The security guards on duty at the beach, however, denied receiving a report of someone jumping into the sea. The clothes and shoes of Oluwafemi were found in the possession of Ologonla.

Elkana said: “It has been established that Oluwafemi was actually at Oniru Beach before his disappearance. The pastor was the last person that had contact with him. It is not yet established whether Oluwafemi is dead or alive. But circumstantial evidences gathered so far, are strongly pointing towards the pastor. The clothes and shoes of the missing person were found in the possession of the pastor. The pastor did not just sell the phone belonging to the missing man; he also converted the money he found in the trousers of the missing person to his own use. There is no record showing that the pastor reported the incident to any police station.”

The Lagos State Commissioner of Police, Hakeem Odumosu, has ordered the immediate transfer of the case to the State Criminal Investigation and Intelligence Department (SCIID), Panti, Yaba, for further investigations and diligent prosecution.

Previous “No d!ck is worth fighting another woman for”- Nigerian woman narrates how she divorced her ex husband
Next Pope Francis ‘tests negative’ for coronavirus after suffering heavy cold