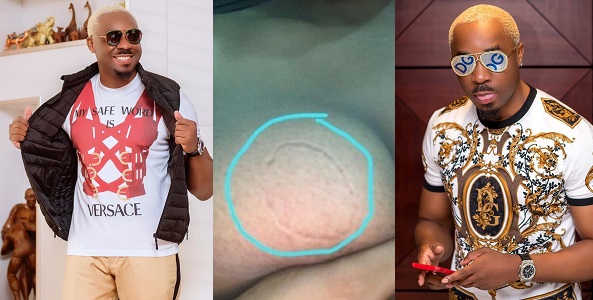 A woman shared photos of the injuries her ex-boyfriend inflicted on her because she reposted Pretty Mike’s post stating that a beautiful woman isn’t meant for only one man.

Pretty Mike explained in his controversial post that it is hard for only one man to take care of a beautiful lady, except he’s “capable of doing what eleven men can do.”

The post went viral and a lady took a screenshot and posted it on her Instagram stories. She said it angered her boyfriend and he stormed her house to rain insults on her. He called her a prostitute then bit her breast and broke her nail.

The lady later took to Instagram to lament to Pretty Mike, who, in turn, shared it to Instagram.

He wrote in the caption:

this is Totally Uncalled for Mr Lekan,I don’t know why a lot of guys are feeling insecure about my previous posts,attacking ur ladies who agrees with me or some of the ladies who reposted the post on their stories,Did I say anything wrong ? Or is it a crime to advocate for our beautiful ladies,i do not condone any man laying his hands on any lady for any reason more less because of a post I made?,all our ladies deserves to be cherished and pampered and if you cannot take care of your woman properly den 11 other men will do that for u !!! “chai Oga u even bit her, u be Vampire ? you want to use that ur crocodile looking teeth to disfigure her breast or what?!!! My dear I deeply apologize on behave of my male specie, You deserve the world and every beautiful thing in it… God will bless u endlessly ???, I will call u later in the day as promised #SayNoToAbuse#SayNoToToxicRelationship #TeamHusbandMaterial 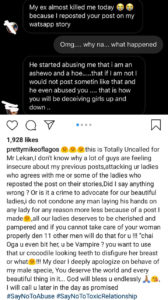 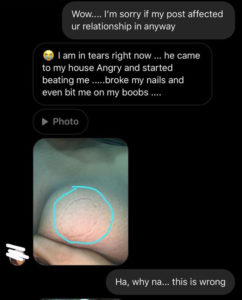 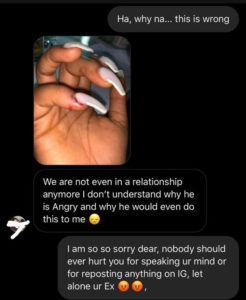 Abaribe: The wicked people in Nigeria don’t want to die but we are losing the good ones