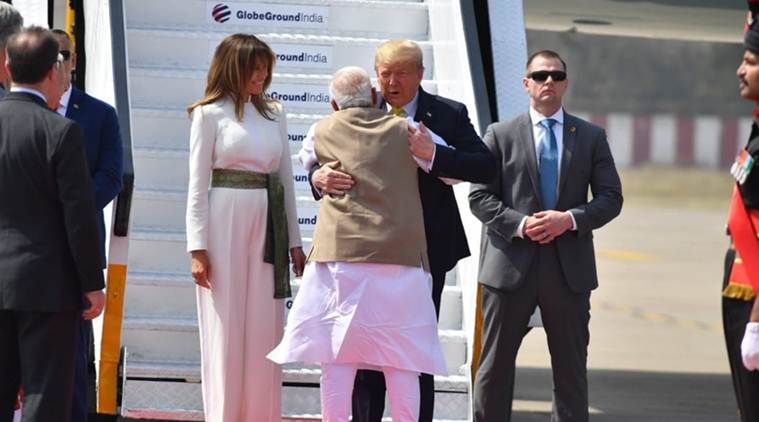 Donald Trump has embarked on his maiden visit to India becoming the seventh US president to visit the South Asian country.

Donald Trump and his wife Melania have visited the Taj Mahal on the first day of their trip to India.

The iconic “monument to love” was the second stop in a 36-hour official visit, Mr Trump’s first to India.

Trump arrived on Monday in Ahmedabad, the largest city in the western state of Gujarat, where he addressed a crowd of more than 100,000 Indians at a cricket stadium.

“America loves India, respects India,” said Trump as he stepped out to address the rally, to roars of approval. “India gives hope to all of humanity.”

He also had words of praise for Mr Modi: “Everybody loves him but I will tell you this, he is very tough. You are not just the pride of Gujarat, you are living proof that with hard work, Indians can accomplish anything they want.”

The event, organised in Ahmedabad in Modi’s home state of Gujarat on Monday afternoon, was the pinnacle of Trump’s visit to India and a platform for the two leaders to show off their enthusiastically friendly relationship. Before taking to the stage, Trump rally favourites Madman Across the Water by Elton John and Macho Man by the Village People boomed out across the giant stadium.

The event was called “Namaste Trump” (Hello Trump), in reciprocation to the “Howdy Modi” extravaganza Trump hosted last year for the Indian PM in the US city of Houston.