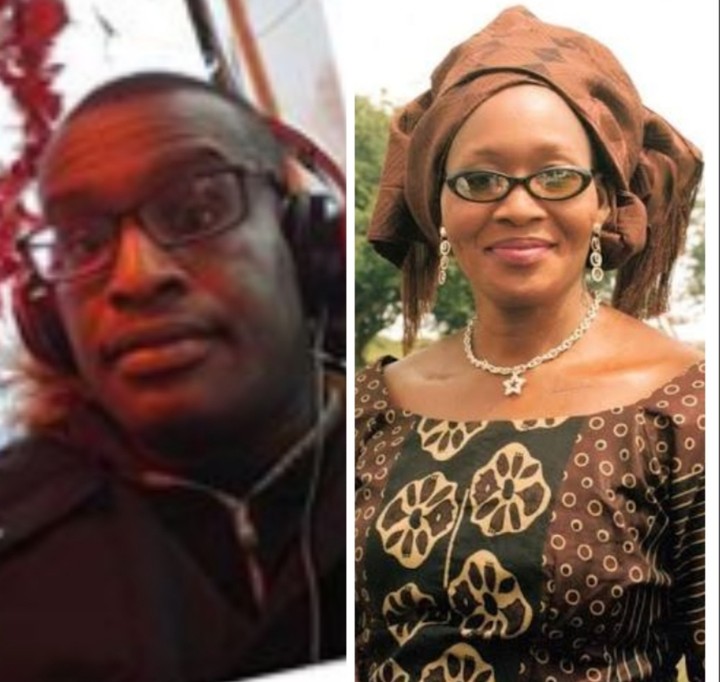 Controversial Nigerian social media personality and journalist, Kemi Olunloyo has been called out by her son Enitan Robert as he turns 33. 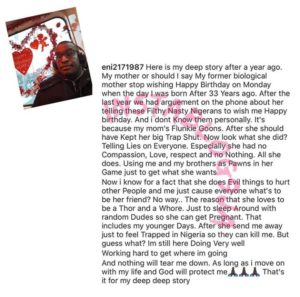 According to Enitan’s post, Kemi is now his ‘former biological mother’ and she has stopped wishing him a happy birthday after they had a falling out over the phone a year ago.

He alleges that their fight was about Kemi “telling these filthy nasty Nigerians to wish me a happy birthday.” He goes on t say he does not know these people personally and he wishes she would have kept “her big trap shut.”

Enitan then launches into his mother’s controversial life talking about how she “tells lies on everyone, especially she had no compassion, love, respect and no nothing.”

His post also accuses Kemi of using him and his siblings as “pawns in her game to get what she wants.” Enitan adds that she does evil things and hurts people, himself included because everyone wants to be her friend.

He hits heavy on his mother when he alleges that she “loves to be a whore just to sleep around with random dudes so she can get pregnant.” He says this includes his younger days.

His accusations do not end there as he also accuses his mother of sending him to Nigeria to feel trapped so they can kill him.

He concludes his post by saying he is still here and nothing can tear him down as long as he moves on with his life because God will protect him.

“30 years ago today, I had my first child. I raised him alone and made it. To all the single moms out there, success is possible so better learn from me. Happy 30th birthday ?Enitan Robert. February 17th 1987”.

In the past, there has been a controversy concerning Kemi’s children. Tokunbo Aboderin who was called a family member claimed she was related to the Olunloyo’s and she knew the true story behind Kemi’s children,

Aboderin alleged that Kemi’s children were fathered by her father Omololu, ex-governor of Oyo state, emphasising that Olunloyo is mentally imbalanced.

Aboderin further revealed that Kemi’s children were taken away from her in the United States (US) because she harasses them and has not seen the children ever since.

In her response, Kemi said she found the story funny and slammed Aboderin as an attention seeker who her father slept with and dumped in the ’70s.

The Queen doesn’t own the word ‘Royal’, say Prince Harry and Meghan Markle

Naira Marley gives girls reason they should make their own money