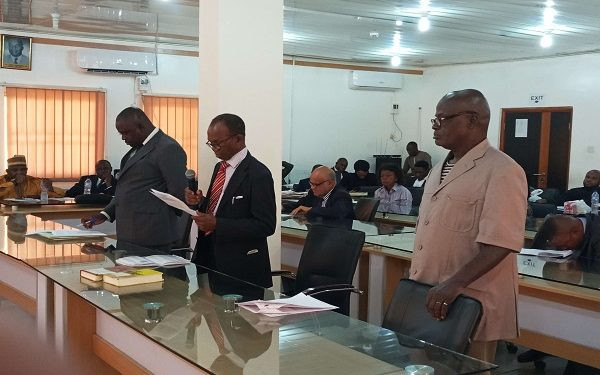 The Medical and Dental Practitioners Disciplinary Tribunal, on Tuesday February 18th in Abuja, arraigned three medical doctors for their alleged roles in the death of three-month-old Peace Oluwole.

The Nation reports that the medical practitioners, Dr. Iyoha Joseph, Dr. Obafemi Kuye and Dr. Mukaila Oyewunmi Oladipo, were accused of conducting themselves unprofessionally by administering unnecessary drugs, delaying necessary actions and exposing the baby’s system to unnecessary drugs, which resulted in his death.

The doctors were presented before a panel headed by the chairman of the tribunal, Prof. Abba Hassan.

According to the charge sheet read by the Registrar of the Council, Dr. Tajudeen Sanusi, the deceased baby was admitted to the R. Jolad Hospital in Gbagada, Lagos State, in March 2013, where the three doctors work. He was returned after he was discharged in distress before his death. The three doctors allegedly acted infamously contrary to the rules of the code of medical ethics of Nigeria, 2008 edition, and punishable under the Medical and Dental Practitioners Act Cap M8 Laws of the Federation on Nigeria 2004 as amended.

Dr Iyoha Joseph was accused of discharging the baby prematurely on March 11th 2013 when he did not observe and document clear indications that the baby had recovered from the ailment  for which he was admitted, thus causing his death. He was also accused of claiming to be a specialist pediatrician when he did not have any additional qualification registered by the Medical and Dental Council of Nigeria (MDCN).

Dr. Obafemi Kuye was accused of seeing the baby but failed to take adequate history of the baby or attend to him.

Dr. Mukaila Oyewunmi Oladipo was accused of failing to take remedial measures to relieve the patient of an obvious respiratory distress when he was re-presented at the hospital after being discharged earlier, and delaying other procedures for more than 30 minutes which eventually contributed to the baby’s death

When the seven-count charges were read to the three accused doctors, they all pleaded not guilty.