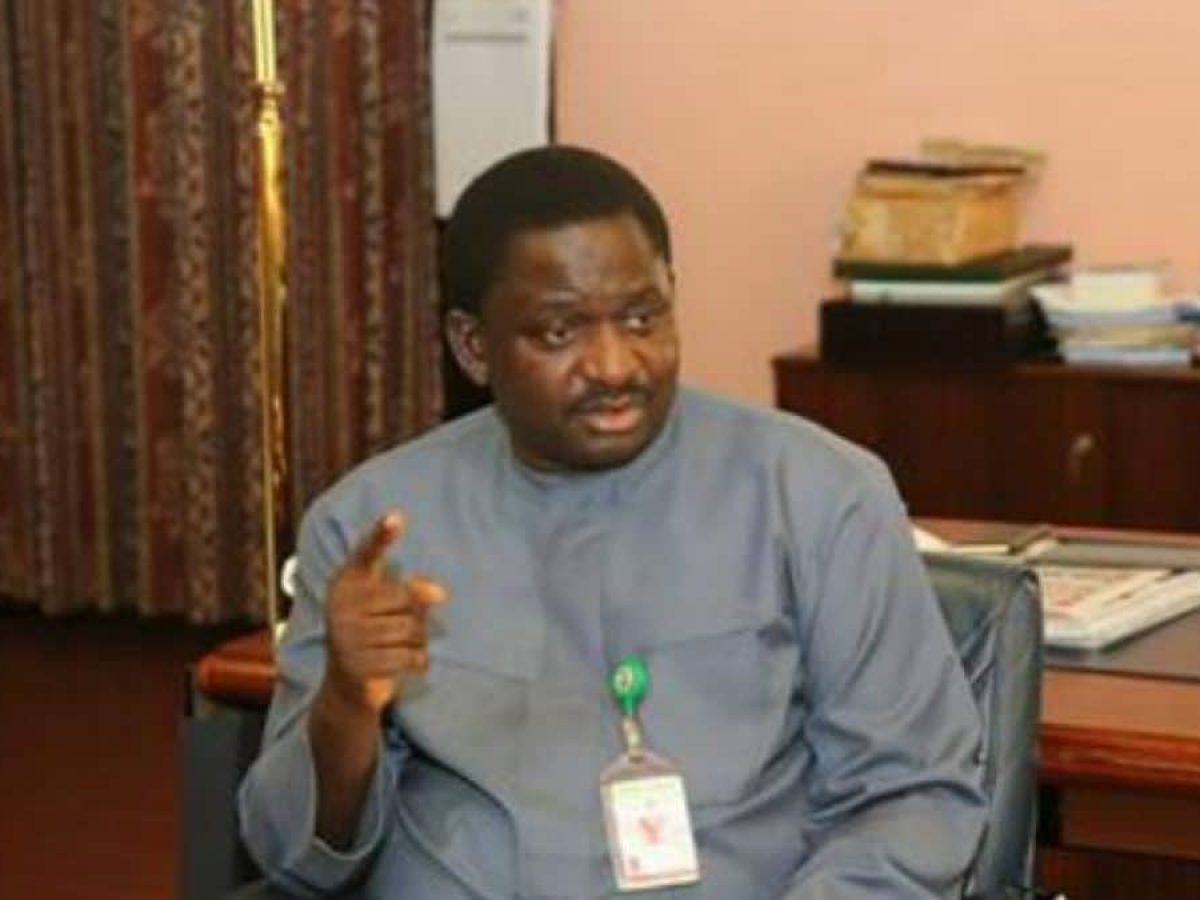 President Muhammadu Buhari’s Special Adviser on Media and Publicity, Femi Adesina has alleged that Nigeria would have been dead and gone if his principal was not elected as the country’s President in 2015.

In a new article titled “Insecurity: What Buhari has done, and is doing”, the Presidential spokesperson claimed Boko Haram who were heading to the south would have taken over the entire northern Nigeria.

According to Femi Adesina, bombs were going off like firecrackers in the country daily before President Buhari took over. He stated that the first thing Buhari did after he resumed office was to restore morale of the Nigerian military by reequipping, retraining and improving salaries and welfare.

Read the article below;

Each time he itemizes the three focal areas of government, President Muhammadu Buhari follows the same order: we shall secure the country, because you have to first secure a country or institution before you can efficiently manage it. We will revive the economy, and create jobs, particularly for our teeming youths, and then, we will fight corruption.
The order above shows the priority that the President gives to security, as well as law and order in the country. But each time there’s a glitch or snafu (situation normal all fouled up) in the country, some naysayers scream and wail as if nothing is being done. But the hard truth is that a lot has been done in terms of security, and is still being done by the Buhari Administration.

When he came in May 2015, what did he meet? A country that was almost in disarray, with bombs going off like firecrackers daily. The insurgency by Boko Haram was festering in the North-east, North-West, North-Central, with Abuja, the Federal capital having been serially bombed. There was Nyanya 1, Nyanya 2, United Nations Building, Police Force Headquarters, series of shopping malls, churches, mosques, and many others, all bombed, with many lives lost.
The insurgents were already in Kogi State, almost overrunning it. And from there, where would they have headed? South-west, from where they would bivouac in South-south, and the country would be gone. Dead. Forgotten.

But at Eagle Square, where he took the oath of office on that memorable day, the brand new President gave a directive. The command centre of the Boko Haram war should move to Maiduguri, in Borno State, which was the epicenter of the insurgency. Pronto, the Service Chiefs moved, and the country was saved.

Boko Haram got flushed out of Abuja, North-central, North-west, Yobe, Adamawa, and got circumscribed in Sambisa Forest. Soon, their last stand, Camp Zero fell, and since then, they have been scattered like sheep without shepherd. They mingled with the civilian population, from where they launch cowardly atavistic attacks. They became degraded, but just like a scorched snake, not beheaded yet, they still retain capacity for evil. But can you compare what is, with what used to be? Not at all.
But some people have short memories. They say not much is being done to tackle insecurity by the Buhari government. Really?

Admittedly, many more frontiers of insecurity have been opened: banditry, kidnapping for ransom, communal clashes, farmers/herders clashes, and many others. But the baby that says the mother will not sleep, he too will not snooze at all.

The Nigerian military was in tatters before Buhari came. They were ill equipped, ill trained, ill motivated, and were turning their backs to the enemies in the frontline. First thing to do was to restore morale through reequipping, retraining and improvements of salaries and welfare. It affected both the police and the military.

The Chief of Air Staff, Air Marshal Sadique Abubakar gave an idea of what was, and what is, in Abuja two days ago, when President Buhari inaugurated two Agusta 109 Power and one MI-171 E helicopters.
Said the Air Chief: “Just five years ago, the Nigerian Air Force was facing serious challenges with an abysmal 35 percent aircraft serviceability status for all operable aircraft. At the same time, terrorism, insurgency and other heinous crimes were ravaging the nation with Improvised Explosive Devices exploding not only in the North-east but, indeed, in several urban centers, including the Federal Capital Territory.

“On assumption of office, the President approved the procurement of military equipment including fighter aircraft and helicopter gunships. This visionary step has profoundly impacted positively on Nigerian Air Force operations…Government has so far procured and inducted 22 aircraft, the Service is expecting 17 additional platforms including 12 Super Tucanos from the United States… The Service has undoubtedly come a long way from where it was in 2015.”

Just like its motto, the Nigerian Air Force is now willing, able and ready. President Buhari did it.

The army, navy, police, and all other security agencies are not left out in the new wind of reequipping and retraining blowing across the sector. And the result is the bloody nose being given criminals in different parts of the country. And it continues, till the whole land is secured.
If there was efficiency, why is there proliferation of regional security outfits; Amotekun in the South-West, Shege-Ka-Fasa in the North, and with other parts of the country warming up to set up their own? Good question. Security is collective responsibility. It is a collaboration between the government and the people, and those who heap all the blame on government, for political capital, are missing the point. The people must be involved in securing their communities and country, but within the bounds of the law.

The Multinational Joint Task Force (MNJTF), established by Nigeria and her neighbors to combat insurgency, got a fillip as soon as President Buhari got to office. With headquarters in N’djamena, Chad, it became a potent fighting force, under the inspiration of Buhari. The contribution to routing of the insurgents is unquantifiable.

What of the many military operations launched in different parts of the country, without which the land may have been impossible to live in?
Operation Lafiya Dole has recorded remarkable successes against Boko Haram. Over 12,000 hostages held by Boko Haram have been released, roads abandoned for many years have been reopened, same for schools closed for over two sessions, while emirs who fled their palaces have returned.

Operation Safe Corridor was established in 2015 to de-radicalize repentant insurgents. Thousands of them have reformed.
Operation Sharan Daji is a collaboration between the armed forces and other security agencies set up to combat banditry and cattle rustling in the North-West. Last week, the President said government was going to be harder on bandits, and two days ago, special forces of the police raided the Ansaru terror group in Kaduna, killing about 250 terrorists.
What of Operation Safe Haven/ Whirl Stroke? This was set up, composed of the military and other security agencies, to combat cases of farmers/ herdsmen clashes in states like Plateau, Nasarawa, Benue, and others. It is recording relative successes.

There’s Operation Delta Safe, which has restored sanity in the Niger Delta, Operation Awatse, which flushed out all manners of criminals in the riverine areas of Ogun and Lagos states, Operation Puff Adder by the police, and many others. Does anybody then still wonder what the Buhari Administration is doing on tackling insecurity? Even the blind can see it, and the deaf can hear it. Well, except those who choose to be willfully blind and willfully deaf. There’s not much anybody can do to help them.
There was a time the Abuja-Kaduna road was crawling with abductors and kidnappers. Not anymore. Relative sanity has been restored. Kidnappers are being arrested, and made to face the law. And it is work in progress.

Consider this checklist of breakthroughs against criminals in recent times:
• Arrest in April 2016 of Usman Mohammed, aka Khalid Al-Barnawi, leader of the Ansaru Terrorist group and one of the most wanted terrorists in the world, with a US$6m United States bounty on his head. He’s currently being prosecuted alongside his accomplices.
• Arrest in March 2017 of Amodu Omale Salifu, leader of an ISIS affiliate group active in North Central Nigeria, plotting to bomb foreign embassies.
• Arrest of two suspected Ansaru leaders, Ahmed Momoh and Al-amin Mohammed Jamin, in April 2017 at Igarra in Edo State. The two were confirmed associates of Abu Uwais, a prominent Ansaru kingpin terrorising residents in Kogi and Edo states.
• In December 2017, the following notorious kidnappers were killed in Kogi State: Ahmadu Sulaiman (aka Oga), Shumo Haruna (aka Halilu Aliyu) and Abdullahi Abdulkadir aka Maijaki. They were responsible for high-profile killings and kidnappings in/around Ajaokuta.
• Militant, Don Waney, responsible for several murders in Rivers State, killed by the military in January 2018
• Badoo Ritualists’ gang, dismantled in Lagos State
• In January 2018, four suspects notorious for robbing and/or kidnapping commuters in Kogi State and its environs, were arrested by the DSS in Otokiti, Adavi LGA of Kogi State: Mohammed Kabir (aka Master and Nicko), Muhammed Musa (aka World Best), Audu Emmanuel (aka Sneider) and Jallo Yunusa.
• On 17th February, 2018, at Irrua, Edo State, DSS operatives arrested a gang of high profile kidnappers who dominated the Kogi and Edo corridors: Umar Abubakar (aka Small), Abubakar Ahmadu (aka Sarkin Yaki), Aliyu Abubakar (aka Koroko), Aliyu Mohammed (aka Chogo) and Abubakar Umaru (aka Bokolori).
• Cattle Rustling kingpin, Tsoho Buhari, aka Buharin Daji, killed in Zamfara State in March 2018. Several members of his gang have also been killed or arrested by security forces. (On 14th December, 2017, Umar Abubakar (aka Yellow), one of his top associates, was shot and killed by DSS in a gun battle in Adavi LGA, Kogi State.
• Arrest in May 2018 of 56 suspected criminals / kidnappers / gunrunners in and around Birnin-Gwari, Kaduna State, by the Nigeria Police Force
• Major masterminds of the Offa Robbery, in Kwara State, arrested by the Nigeria Police Force in May 2018.

Mobile police squadrons and military formations are being established in different flash points in the country. Humongous financial resources, which could have been used on infrastructure and other areas of development, are being deployed to security, just so that Nigerians can live in peace. And it continues.

Just like Air Marshal Abubakar said at the induction of new helicopters for the Air Force on Thursday, “In the race to add value to our society and secure our communities, there is no finishing line.”

Yes, securing Nigeria is a task that must be done, and is being done. The work continues.