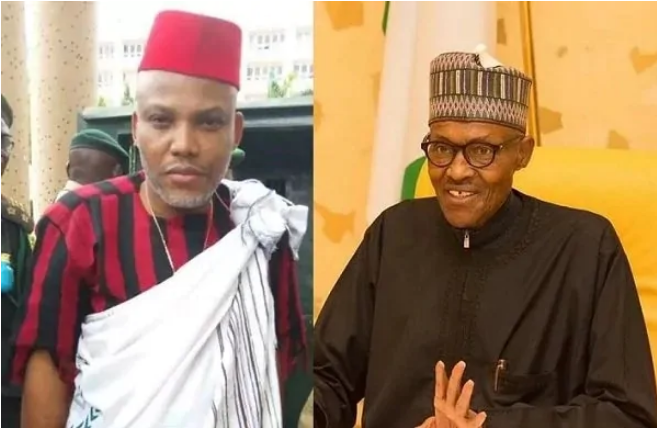 Members of the Ohanézè Ndígbo Youth Council Worldwide (OYC), a pan-Igbo socio-cultural group, have appealed to President Buhari to grant presidential pardon to Namdi Kanu, the leader of the Indigenous People of Biafra (IPOB), to enable him attend his parents’ burial which comes up next weekend.

Kanu who is standing trial for treason, has been on self exile since 2017 after the military invaded his Umuahia, Abia state country home.

President General of OYC, Okechukwu Isiguzoro and its Secretary, Okwu Nnabuike, in a statement released, said the group has credible information that military men have been stationed around the premises of the Kanu’s parents ahead of the funeral.

The group stated that such presence of the military could further ”damage the image of the Buhari administration in the eyes of the international community.”

“Ohanaeze Ndigbo Youth Council Worldwide is worried about the military Presence at Kanu’s Village, Afaraukwu Umuahia, Abia State few days to the burial of HRM Eze I O Kanu and his wife.

“We appeal to President Muhammadu Buhari to consider the international damage it will cause to the reputation and image of Nigeria to the outside World, as int’l Community are watching keenly to see if there will be any form of Human Rights violations and Abuses by Nigeria’s Military before, during and after the burial rites of the Igbo Paramount Ruler and His wife by next weekend.

“OYC insists there’s no need for any provocative action promoting violence by Nigeria’s Military before, during and after the burial of HRM Eze Kanu, because Abia State is calm and secure.

“Buhari should pull out the Military and accord the last respect for the late King by granting permission and Presidential Pardon to Nnamdi Kanu to return and bury his parents according to Igbo tradition and culture”.

The group also extended an invitation to President Buhari to attend the funeral or send a delegation.

“There’s nothing amiss if President Muhammadu Buhari in person or through a high power delegation attend and send condolence message to the people of Afaraukwu Umuahia on the demise of their paramount ruler, HRM Eze Kanu and his wife.

“Such Presidential gesture will portray him as a good Father of the Nation, irrespective of the self evident Ipob’s stance on self determination and fight against injustice meted out against Igbos since after Biafra War Civil 50 years ago.

The group opined that such gesture a presidential pardon to Nnamdi Kanu, release of other Biafra agitators in detention and sending delegation to the burial will be applauded by both the International Community and Nigerians at home, and will also go a long way in giving the Ibos a sense of belonging and restore their confidence in the Buhari administration.