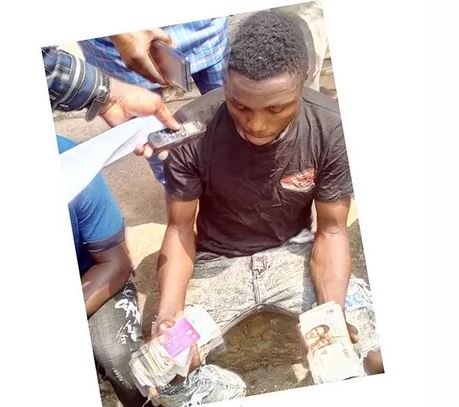 The Edo State Police Command has arrested a 29-year-old ATM thief identified as Adetunji Adesina, after he stole N678,000 from his recent victim Ehitomwan Aghama.

Adetunji who was found to be in possession of 10 ATM cards of various banks. revealed that he met Aghama at the ATM facility of one of the new generation banks in Sapele Road, Benin City.

The suspect said he acted like he wanted to withdraw money and distracted his victim by dropping his phone of the floor.

“My name is Adetunji Adesina, I am from Oshogbi in Osun State, I met Aghama at the ATM machine of the bank (name withheld) in Sapele Road, I behaved as if to say I wanted to use the ATM machine, then deliberately dropped my phone on the ground, in pity he wanted to help me with the phone.

“I got his ATM pin number when I was pretending to help him, I later withdrew 678,000.00 from his account, using the ATM, and POS (Point of Sales) before I was arrested by the Police.”

Also speaking to newsmen, Aghama said he was surprised to see that N20,000 had already been withdrawn from his account after he went to the bank to make a complaint of his ATM card getting stuck in the machine. He also revealed that N600,000 which was paid into his account a week later by his brother who stays abroad, was withdrawn by the suspect as he did not block the ATM card.

Aghama was contacted by the police after they arrested the suspect during a night patrol.