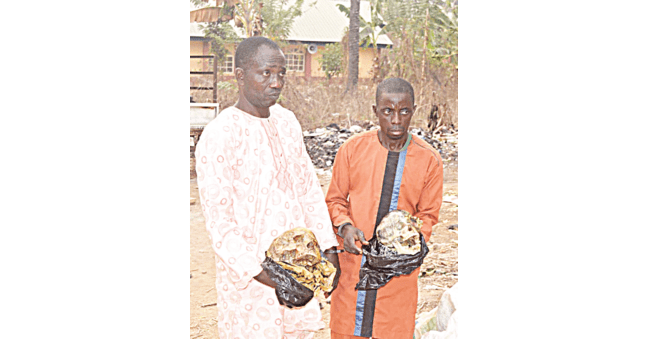 Authorities of the Osun State Police Command have arrested a 42-year old man, identified as Adesina Adeniyi for allegedly being in possession of two human skulls and a decomposing liver.
He was said to have been arrested by mobile policemen along Ibadan-Iwo road during the routine stop and search operation.
Parading the suspects on Tuesday before journalists at the headquarters of the Osun State Police command, the Osun State Commissioner of Police, Mr. Babatunde Kokumo said the suspect was arrested on the 28th January 2020 at 1:00 pm.
According to him, “personnel of No. 39 Police Mobile Force, attached to lwo Area Command while on routine stop and search on visibility policing to prevent and detect crimes along Iwo/Ibadan Road, Iwo, Osun State, intercepted a commercial bus and a thorough search conducted on their persons led to the recovery of two severed human skulls and a decomposing liver.”
“The suspect,  Adesina Adeniyi, a 42-year-old of Kajola area, Iwo, confessed that the recovered human skulls and liver were removed from Muslim cemetery and mortuary where he worked as an attendant.”
Kokumo continued “diligent investigation conducted by Police detectives led to the arrest of his accomplice, one Oluwole Olapade, 58 years of Yemetu Area, Ibadan, Oyo State who had promised to pay the sum of N20,000 for a skull to be used for charms and both suspects have made useful statement to the Police.”
previous post