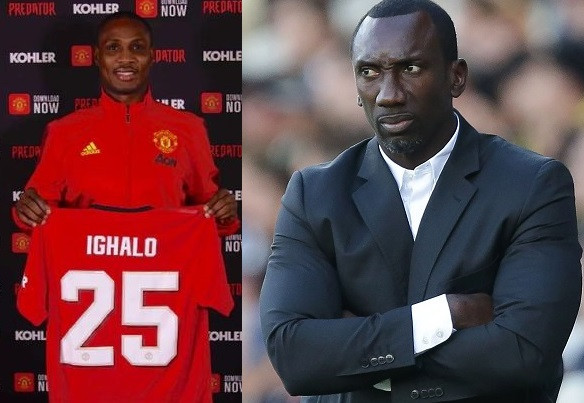 The Nigerian international, 30, joined United in a shock move on January 31 as Ole Gunnar Solskjaer was desperately looking for a replacement for injured Marcus Rashford.

Ighalo, who scored 36 goals in 90 League games for Watford before going to China, signed on loan from Shanghai Greenland Shenhua for the rest of the 2019/20 season.

Commenting on Ighalo’s shock move to Manchester United, Chelsea football legend Jimmy Floyd Hasselbaink admitted that the Nigerian footballer is the luckiest man in terms of joining his childhood club. But the former Dutch footballer said Man. United’s decision to move for the Nigerian international shows how far Manchester United have fallen behind rivals

“He must be the luckiest man! Going to China, being away from Europe, nobody seeing him for two-and-a-half years since he was at Watford and then getting a loan move at United,” he told Sky Sports.

“Wow. That doesn’t happen! It says how far behind United are from Liverpool, Manchester City and even Chelsea. They have got a big job ahead.”

With United missing out on top target Erling Braut Haaland before the January window even opened, Hasselbaink added: “They needed somebody in.

“I think [Ighalo] was not their number one and I would be surprised if he was their number two or three as well.

“He is getting an opportunity and he will definitely get minutes and we will see if he can do it.”