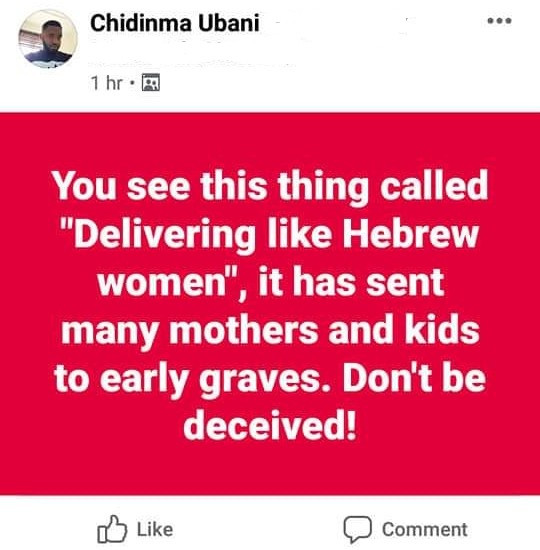 A man has called out women who opt to deliver their children through CS. He tagged them as “lazy” and said they are wasting their husbands’ money on an ”avoidable operation.”

Facebook user, Chidinma Ubani advised women to stop risking their lives because they want to deliver like the biblical Hebrew women, and pointed out that so many women have died as a result.

”You see this thing called delivering like Hebrew Women, it has sent many mothers and kids to early graves. Don’t be deceived!” Ubani wrote.

But Ezemgbe Ifeanyichi did not agree with the advice and he called out women who opt for Caesarean Section.

He wrote: “Majority of women today are too lazy to push in the labour room. How can a woman certified by a doctor to be medically fit to deliver her baby opt to go for CS? Is that not madness. I am yet to see the reason behind that madness.

“A man will use the money meant for family upkeep to settle operational bills even when the woman can deliver on her own. That is how wicked and heartless some women can be. Plunging their husbands into avoidable expenses. God may such woman never near me.” 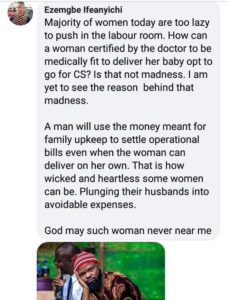 Edo Man Returns Wife To Her Parents, Says Her Vagina Is Too Wide

”I have the right to discipline my son, if you think I was wrong, come and adopt him” – Father who slapped son who failed his exams after paying $21k school fees, tells critics