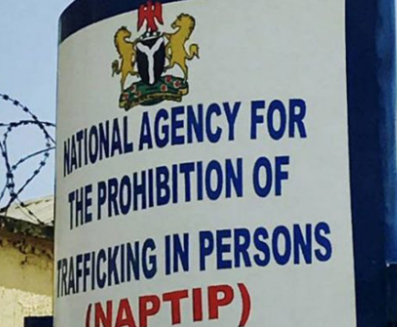 31-year-old Kikelomo has narrated how she was allegedly treated like a slave after being trafficked to Lebanon in October 2019, with a promise of being paid $200 for taking care of the aged mother of a Lebanese man staying in Lagos.

According to the mother of three, she was tossed from one slave master to another and also ended up in prison after she demanded to return to Nigeria when it dawned on her that she has been tricked.

Recounting her experience at the International Organisation for Migration (IOM) in Lagos after being rescued by the National Agency for the Prohibition of Trafficking in Persons (NAPTIP) following a complaint made by her husband, Kikelomo said;

“I cannot begin to explain the kind of degrading treatment I received from those people.

“It was just horrible. I never knew that I was sold as a slave. I met the Lebanese man in August through a friend of mine who sold noodles near the foreigner’s office at Apapa.

“I used to tell my friend I would like to leave Nigeria for any country abroad to work because people always say that anyone who lives in Lagos can survive anywhere in the world. I was a hairdresser and just had my third baby when I accepted to go.

“It was the Lebanese who asked my friend who I was and whether I would like to travel abroad to work as house help and look after his old mother.

He said he would pay me $200 monthly and that I will not spend anything and that I would be able to speak to my family anytime I wanted to.

“It sounded good and I agreed. He asked if I had a passport and I said ‘no’. He was the one who paid for my passport and helped get it. He called me to say that my visa was ready and showed me the paper. I only saw my name and confirmed it. The rest of the things were written in Arabic.

“He never gave me any money or anything. On the day of the trip, he wanted only the two of us to go to the airport but my husband and pastor refused.

“He resisted earlier by saying that he will not bring them back but they said they will find their way back. At the airport, it was only I and the Lebanese that were allowed inside.

“He is very popular at the airport. All the people working there know him. Even the officers who wanted to ask for money before asked me to go when the man he handed me over to told them I was from him. So, I did not suspect anything was wrong until I arrived in Lebanon and saw myself in a market.

“In that market, they called us Abi which means slave. They took me to three different houses and each of those people told me that he bought me. Anytime I complained about the treatment or tiredness, they would say I was bought with their money and I should not complain.

“I worked hard as a slave and not a house girl. Even after working, they will not give me good food just bread with Lipton so I always complained. So, they would give me the remnants of their food scattered in the plates to eat and put the rest in the bin.

“They were disturbing me for sex but I never gave in. I started complaining that I wanted to go back to my country but they said my family must bring another Nigerian that would replace me before I could be released. I was even taken to prison and locked up because I kept insisting I wanted to come back to Nigeria.

“In the first and second houses, I was not allowed access to phone and could not speak to my husband and children. That made me more worried. I had my phone from Nigeria but no SIM card and no access to the internet. Those families refused me a connection to their internet on the basis that it was expensive.

“It was at the third place that I was told I can only use the Wi-Fi at night and that was when I was able to reach my husband and told him to cry out because the situation was becoming critical.

“I thank God that Nigerians helped me to come back. I will advise people to stay in Nigeria because there is no place like home.

“Those middle easterners will lure you with beautiful stories only to make your life miserable in their country. For the months I worked for those families, I was never paid the promised $200 monthly.

“It was the Nigerian Embassy in Lebanon that helped me to collect $600 and gave me at the airport on January 31 which was the day I was coming back to Nigeria.”

The 51-year-old Lebanese who has been arrested by NAPTIP however accused the Nigerian lady of lying against him. The man alleged that he was only trying to help the Kikelomo who lied to him that she was single and not married.

“I have four children who are in university. One of my sons has cancer. I was away from Nigeria for two years and when I came back last year, I told her friend I was looking for help and she said no problem and that she would ask her friend.

“She worked at my sister’s house and she called every day that she was enjoying the place and that she was very happy there. Another day, I called her several times but she did not answer her call.

“I told them I did not force her, she went there on her own will. I only wanted to help her. I have my children and my family.

“They should not put me in trouble because I did not do anything bad. Everybody knows me because I am into construction in Nigeria.”

Also addressing newsmen, Lagos Commander of NAPTIP Daniel Atokolo said the Lebanese man was arrested on January 30 after the Nigerian lady returned to the country.

“Facts of the case so far reveal that the suspect had trafficked the victim on the pretence of employing her as a caregiver to his aged mother in Lebanon.

On arrival, the victim was reported to have been received by an agent who handed her over to a family where she was exploited as a domestic servant. The victim also reported that she was sexually harassed while working for the said family.

“When approached by the victim’s husband to return his wife, the suspect reportedly demanded that the victim would only be returned if the family provides another to replace her.

“The agency is currently investigating the suspect’s activities to ascertain his possible involvement in trafficking Nigerians to his home country for exploitation.

“The recently celebrated return of Omolola Ajayi is also not far from our thoughts; therefore, the agency would like to use this opportunity to reiterate its warning against the recent flux especially by Nigerian females to countries like Lebanon, the United Arab Emirate (UAE), in search of the proverbial golden goose. Their stories almost always end in labour and sexual exploitations.

“NAPTIP urges Nigerians to not only assess the job offers made by these foreign benefactors but also do a personal assessment of your qualification to fill the roles in the proposed opportunities. To the recruiters and traffickers, be warned that we will get you.

“We also express the agency’s appreciation to Nigerians in the Diaspora who aided the rescue of the victim. We  also thank our sister organisations for their co-operation and collaboration.

“Organs harvesting is topical now but not much of it is heard in Nigeria. We have not had cases of people who come to complain that their organs are being harvested. But we know it happens to young men and women who go to ply their trades abroad, for example Beach Soccer.

“What they do is have people like sports agents to register in your country to scout for fit young people. They conduct medical checks to determine their fitness.

“But what many people do not know is that these so-called agents could have sick clients or relatives who need one organ or the other to survive.

“So, they check for compatibility and once they get a match, they will send the person scholarship or tempting offers only to end up harvesting their organs overseas. It is still being done undercover in Nigeria.”

Jigawa state government confirms mysterious deaths of 92 persons within one week in a local govt area. Rules out COVID19 complications