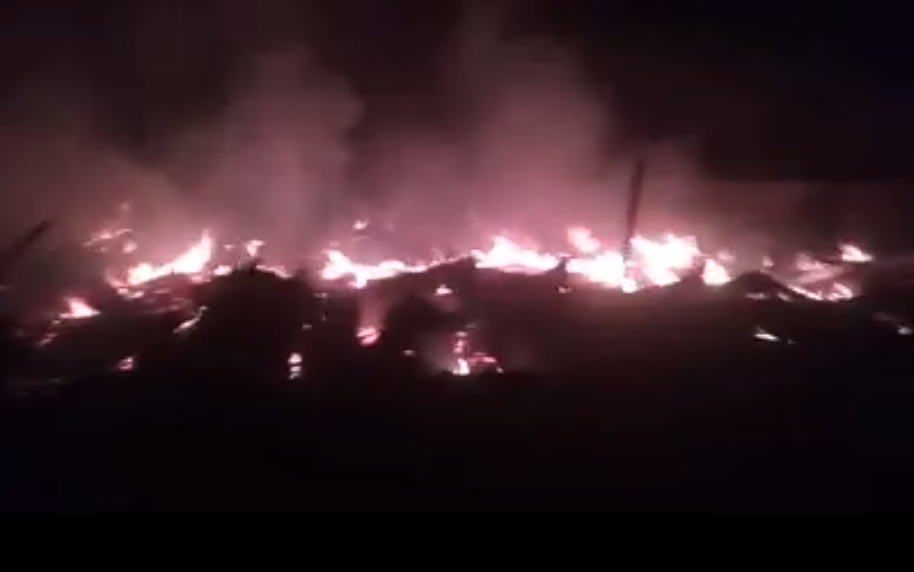 Twin boys, aged 2, were burnt to death when a fire razed their home while their parents were away.

According to a Facebook user, Pepnosy Amadi who shared the story, the incident happened on Sunday, February 2, in Rivers state.

Amadi said the boys were home alone after their father left for work and the mother allegedly left for a joint to have the hot drink known locally as ogogoro.

While both parents were away, the house caught fire and the boys couldn’t be saved in time, a neighbour said on Facebook

Videos shared online show residents looking on helplessly as the house was razed to the ground.

A police van later arrived the scene of the inciden and residents can be heard complaining about their late response. The residents mentioned that the police arrived more than an hour after they called to inform them of the fire.

The neighbour who shared the story said this isn’t the first time the mother is losing a child because of her ”alcohol habit.” She alleged that the same woman previously lost her 7-year-old daughter to a ritualist due to her negligence brought on by her addiction to “ogogoro”.

IT WAS A BLACK SUNDAY INDEED
Never wanted to post this but couldn’t bear keeping silent anymore
This happened close to my street early Sunday morning (5 o’clock) we were woken up by the screams of people living around with the fear of what might happen to other buildings around and flames of fire.
The said family lived in a Batcher, a man his pregnant wife and two twin boys aged 2yrs.

The information gathered was that early that morning the husband left the house to work, while the wife also left to go take a shot of ogogoro (kai-kai) locking up her twin boys inside the room with a lighted candle, nobody knew how the candle started the fire but because there was a gas cylinder inside the same apartment the cylinder exploded roasting the two innocent twins to death not only that alot of buildings were burnt too causing some people to be homeless, properties were lost too.
The lady in question is a native of Ikwerre in Rivers State and according to people living around they said drinking ogogoro is her every morning routine and she always lock those kids inside whenever she’s going out, this same woman as the story was being told lost her 7 yr old daughter to ritualist to this same ogogoro issue
Then I ask is she cursed or she’s stupid???

Since Sunday I’ve been imagining the faith of those two innocent kids, were they re and if their souls could ever find peace because it was a tragic death, at the same time I ve been thinking out loud the type of mother that did this to her own special gift from God, if she truly deserve to be called a mother??? If she really deserve the gift of children in this life??? wasting the life of her twin boys because of her foolishness and one shot of schnapp.

The only thing I asked is for God in his infinite mercy to grant those kids eternal rest
Negligence of a mother. 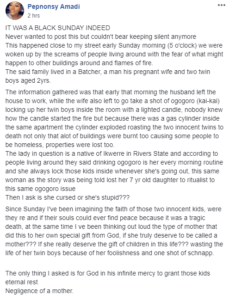 ‘The arrest of suspected suicide bomber, Nathaniel Samuel, shows there is a Christian version of Boko Haram’- MURIC

Another container falls and kills two in Lagos