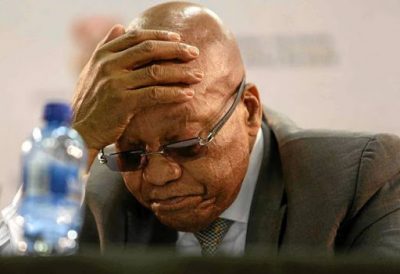 A South African court has issued an arrest warrant for the former president Jacob Zuma after he failed to appear in court to answer corruption charges on the grounds of needing medical treatment.

Zuma’s lawyer,Daniel Mantsha,  on Tuesday presented the judge with a sick note from what he said was a military hospital, but Judge Dhaya Pillay questioned whether the note was valid, as there was no medical number showing if and where the doctor was certified.

“I don’t even know if [he] … is a doctor. There is … nothing to suggest that he is,” she said, before issuing the warrant.

Prosecutors said it was a criminal offence not to fully explain an absence on medical grounds.

The former leader is on trial on 18 charges of fraud, racketeering and money laundering relating to a $2 billion arms deal with French defence firm Thales (TCFP.PA) in 1999, when Zuma was deputy president. He rejects the allegations as a politically motivated witch-hunt.

His legal team said the former president had two operations in early January before going abroad and his illness was a matter of “state security”.

The arrest warrant does not come into effect until the case is due to resume on 6 May.

Dan Mantsha, Zuma’s lawyer, said that he was abroad for medical treatment, without saying where. Local media have suggested he is in Cuba, although it was not immediately possible to verify this.

Pillay concluded that the note was insufficient to excuse Zuma from appearing for the trial, but gave him until it resumes on May 6 to turn up before the warrant kicks in.

Zuma, president from 2009-2018, had previously applied for a permanent stay of prosecution but the court in Pietermaritzburg threw out his appeal in November.

He is accused of accepting 500,000 rand ($34,000) annually from Thales in 1999, in exchange for protecting the company from an investigation into the deal.

Thales, known as Thompson-CSF at the time, has said it had no knowledge of any transgressions by any of its employees in relation to the awarding of the contracts.

The National Prosecuting Authority (NPA) initially filed the charges against Zuma a decade ago but set them aside shortly before he successfully ran for president in 2009. Following appeals and lobbying by opposition parties, the NPA reinstated the charges in March 2018.

Man slams women who opt for CS during delivery, accuses them of being too “lazy to push in the labour room”