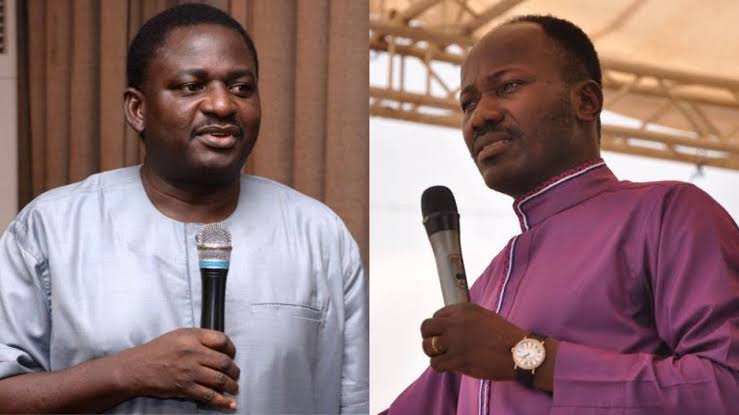 Suleman said this in an open letter he wrote to Femi Adesina, presidential spokesman whom he had earlier disagreed with over widespread insecurity in the country.

In the letter, Suleman said he held Adesina in high esteem. He also said he has deep respect for Buhari.

“Sadly, in Nigeria and especially under this current administration, anyone who speaks truth to power is termed partisan or political; some even say such a person hates President Muhammadu Buhari,” he wrote.

Nigeria’s unity is sacrosanct: The unity and togetherness of Nigeria is sacrosanct. Our collective peace is non-negotiable.

I personally bleed when I hear drumbeats of war and yearnings for the dissolution of Nigeria, either from tribal or political overviews. No nation remains the same after war. Therefore, we can’t be fanning the embers and heating the polity of revolution or dissolution.

Growing up as an aspiring journalists, late Dele Giwa was my role model, especially owing to his approach and activism mentality. Also, whilst growing up as a journalist, Femi Adesina was my view of an extreme perfect gentleman whom I loved from afar until we met at Government House, Rivers state, when former Governor and now Transport Minister, Rotimi Amaechi, made our acquaintance.

Sadly, in Nigeria and especially under this current administration, anyone who speaks truth to power is termed partisan or political; some even say such a person hates President Muhammadu Buhari. But how can a man hate his president? That’s giving a dog a bad name just to hang it.

Let me give you a few shockers, sir, which many Nigerians don’t even know. My biological father is an APC chieftain; a major frontline and stakeholder in Edo state politics with the ruling party.

The governor and the deputy governor of Edo state are very close to me and the national chairman is my brother. Yet, we all relate well and they worship in our church whenever they are around because they separate issues from the relationship. That is principle sir!

I have built schools and given to governments, fixed government roads and rehabilitated people who were convicted. These are verifiable as you can ask my state governor. If I hate this government, I won’t do all that.

Wrong notion of the president:

Also, I hear people erroneously say the president is a religious bigot. I am shocked! How can that be? A very good friend of mine recently spoke to me about president Buhari and I told her my views of him and she laughed. And that evening, President Mumhamadu Buhari called me on phone and we exchanged pleasantries. And, at the end, I prayed with him in Jesus name and he said Amen! Tell me, which religious bigot does that?

So, seeing what is happening now tells me that he is surrounded by people who are painting him wrongly before some who aren’t privileged to know him. Or has he changed from being whom I knew him to be then?

When he was sick, I called all our church members in the 58 nations of the world where we have branches to pray for his speedy recovery and homecoming.

Also, a few weeks ago, I tweeted against Nigerians insulting and using demeaning verbal assertion on the person of the president. I mean, If not for anything, his age should be respected. But I came under fire and was taken to the cleaners for defending the president. But I ignored the backlash because, if you wrestle with a pig, you will be stained but the pig would enjoy it.

On Insecurity and issue of CAN:

Sir, when I read your response to CAN, two things came to mind: I asked myself, must the allure of power make you antagonistic of church leaders whilst your colleague is protecting his? I equally felt your response was ill-timed, knowing these leaders where mourning. I apologise if it came out wrongly or rudely.

John 13.35 says, “by this shall all men know you are my disciples if ye have love to one another.” Some say clerics or the clergy should stay off politics; I think the right word should be that clerics should not be partisan.

Remember that in the last administration, we spoke truth to power, even in a more corrosive and acidic manner than we do now. But it wasn’t a big deal for them because that administration was tolerant and ignored most things said. Therefore, this government should stop responding to everything. The best way to respond to complaints is to give result, not explanations, insults or counter upper-cut.

Condemning killings does not amount to being political! Every other thing is left for politicians to handle but ensuring the safety of lives and property is the responsibility of every Nigerian.

In every clime where you have principled men, criticism is inescapable. We must take it in its stride. Also, rational discourse is now a practical impossibility in Nigeria because you will be termed anti-this and or pro that.

It hurts to see certain folks remotely connected to some issues that do not concern them and yet, are ascribed mastery and expertise on such.

One of my church members and leader of Urhobo Progressive Union was kidnapped. He is 80 years old. It took great wisdom to manage it as a certain extraction of Nigerians threatened to cause chaos because they felt it was an insult to their region.

Few days ago, one pastor coming to see me was kidnapped and the wife was shot. Another one was equally shot that same day on the hand by alleged killer herdsman.

But I refuse to use the word Fulani because I have Fulani friends that are so awesome and nice. But certain devils, some of which are foreigners, even like the Arewa group had rightly said last year, have infiltrated their ranks and fabrics and these foreign devil’s incarnate operate with audacity and temerity, without caring whose ox is gored. We must fish them out!

If I could reach you privately, I would not have resorted to the media. I also took this approach to respond to the heavy insults and name-calling on your tweeter handle which is, well, okay by me and understandable because you were angry.

But I hope this meets you well. This is me pouring my heart to my brother. I am actually not good at writing letters like this. Unlike someone, we all know that does. I guess I would meet him for tutorials. I love you my brother and God bless Nigeria. Apostle Johnson Suleman (Snr. Pastor Omega Fire Ministries Worldwide)

Coronavirus: WHO lists Nigeria, South Africa and 11 others as top risk African countries

Another total lockdown would be counterproductive- Festus Keyamo warns