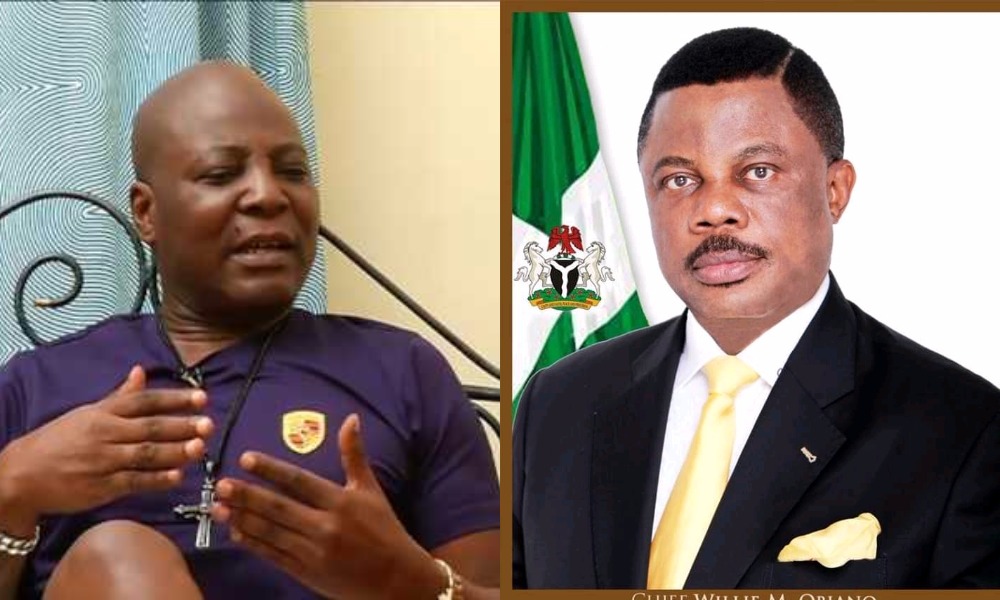 Nigerian entertainer Charly Boy has called out Governor Willie Obiano, days after the Anambra Governor was honored as a knight commander of the pontifical Order of St Gregory the Great (KCSG) at the Vatican by Pope Francis.

Charly Boy who described the Anambra State Governor as loud, pompous and braggadocios, alleged that Willie Obiano seemed more intrested in his female workers than the buisness of the youths in Igbo land.

He further disclosed that he gave Governor Willie Obiano a long rope after realizing that their meetings were not fruitful.

Willy is loud, most times pompous and braggadocios. His own possen no be here. I went to him a few times since he became governor to know what we can do with the youths in Anambra state and Infact Igbo land, but Willy wasn’t so intrested in working with us. He bragged of how he has all areas covered and seemed more intrested in my female workers than the buisness of the youths. Willy like nyash no be here.

I stopped calling or reaching out to him, because our meetings no dey yield any action for the street people. So I just give am long rope, as an Emperor concern. You can imagine my surprise when I was called by Willy all the way from Rome. As usual, e no waste time to start to blow his trumpet again. He was excited as he bored me shitless with the story of his knighthood by the Pope. In his words, it is to be the highest honor bestowed on an African he claimed. Haba, Willy, which kin lie be dat naa?
Justice Oputa received his knighthood from the Pope too, and guess what? the gentleman didn’t lobby for it sam sam.
I GET MANY GIST ABOUT WILLY. 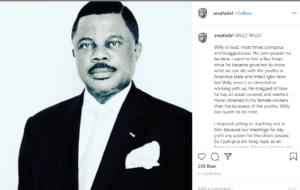 Charly Boy also accused Governor Willie Obiano of “blowing billions of state money to fan his overblown ego”. He also alleged that the governing style and private lifestyle of the Anambra Governor, is being discussed in beer parlours all over Anambra.

Now I dey hear all this story’s about my once upon a time friend who blew billions of state money to fan his overblown ego, Odiegwu.
Scamming, some said has left Awka and found its way to the Vatican.

Willy’s governing style and his private life is being discussed in beer parlours all over Anambra. People are just too upset, and I start to wonder when all this “do anyhow people” go expire for our polity. Willy ,Anambra youths are hopeless that is why many of them are in Lagos ,north and Sahara desert trying to survive .

Willy,APGA is for Ndigbo but the way I see you ,you want sellam to APC Buhari …..people dey watch you closely
Anambra people dey vex say Willy don scatter their state, dem dey plan on exposing the rot in their state and about this trip to Rome. It is unclear for me what actually transpired in Rome, an audience with the Pope or a Papal investiture. My People believe say Willy don carry many Anambra people put for roundabout, just dey do as em like. 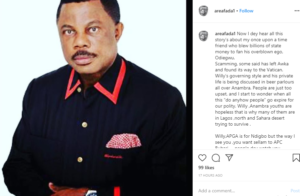 I want Burnaboy to win the Grammy so that we can rest and breathe — Media Personality, Shade Ladipo