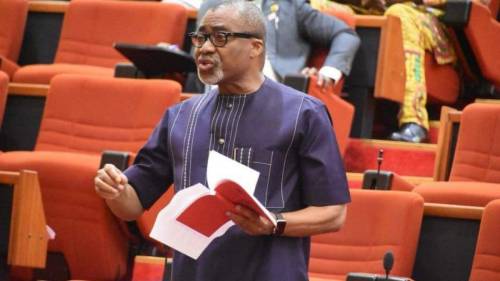 Senator Enyinnaya Abaribe, the Senate Minority Leader, has called on President Buhari to resign immediately following the rising insecurity in the country.

Abaribe who is of the PDP, made the call when the Senate discussed a motion on national security challenges and the need to restructure Nigeria’s security system during plenary today Wednesday January 29th.

While making his contribution to the motion, Senator Abaribe, who was the first to contribute to the motion, faulted the president for failing to tackle the security challenges in the country.

”If you want to treat an issue, you go to the head. We did not appoint the IG or the security chiefs. We will go to the president and ask him to resign.  Nigerians voted APC because they promised to tackle insecurity but they have failed” Senator Abaribe said even as the Senate President Ahmed Lawan tried to stop him from speaking

His call for the resignation of Mr President comes barely 24 hours after President Buhari said he was surprised at the growing insecurity, and said his government will be “harder” on bandits.

APC Primaries: I Hold No Grudge Or Grievance Against You — Tinubu Tells Osinbajo, Other Competitors | Aproko Nation