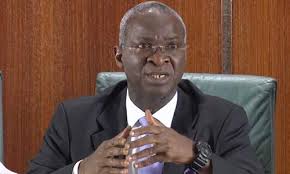 The Federal Government has said that it will not embark on fresh road projects until all awarded projects are completed despite allotting the highest percentage of the 2020 budget to the Works Ministry.

The Minister of Works and Housing, Raji Babatunde Fashola, who gave the hint on the NTA Weekend File, said that the Federal Government has to prioritise and commit its resources to completing critical roads nearing completion across the country instead of embarking on new ones as a result of “constrained fiscal environment”.

According to him, there are 78 of such critical roads and bridges that the government wants to concentrate resources on and finish before contemplating new projects.

The project, according to him, include the Loko-Ogbeto Bridge, Lagos- Ibadan Expressway, Kaduna-Abuja-Zaria highway, the Suleja-Minna highway and the roads that lead to the sea Ports, which he said drive the economy.

Fashola however said new road projects can only be embarked upon when there are compelling needs to do so.

He said: “Now in terms of the budget size, how much is proposed N261 billion? It will not be enough to discharge all our obligations.

“So one of the things we have recommended is to first slow down, if possible stop new projects and commit our limited resources to completing projects that are nearing completion.

“No nation ever has enough money anyway, so those are the priorities but we also have outstanding payments and we have made this known to the President and his commitment to do his best within the constrained fiscal space to support the infrastructure objective, not only of my Ministry but transportation to aviation are so critical because these are the things that will grow the economy, let us focus on the high priorities of the economic objectives of this country.”

He also said the proposed re-introduction of toll gates on federal government has not been approved yet by the Federal Executive Council(FEC).

Fashola explained: “The existing law allows government to toll and people have formed different impressions about it but let me be very clear, tolling is part of our existing law, it will happen, it will happen on completed sections of roads not on uncompleted sections of roads.
“There are still a lot of work to be done and we trying to ensure that tolling administration is more efficient to overcome the problems that characterised the previous regime and some of the reasons why it was reportedly cancelled.
“The last thing to say about tolling is that contrary to the reports in the media that this was part of government policy to raise revenue along with VAT, they are not connected at all.
“We didn’t even discuss it in Council, talk less of discussing it as a revenue raising strategy.
“But what people must understand is that tolls also create employment for people who manage the tolls and we hope that some of the proceeds if substantial can be used to maintain the roads and prolong their design life which is what Nigerians have asked for”.