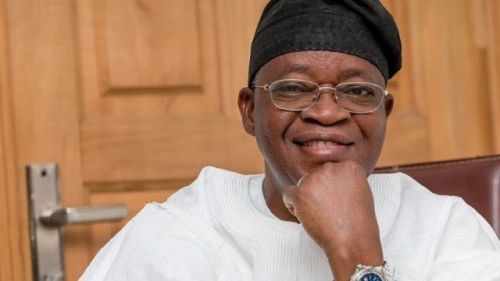 Governor Gboyega Oyetola has vowed not to appoint political aides from other states as it was no longer fashionable because indigenes of the state rejected it.

The Osun State Governor who made the annoucement at Iwo where the former National Commissioner of the National Hajj Commission and renowned journalist, Alhaji Liad Tella was turbaned as the Asiwaju Muslimi of Iwo land, assured indigenes of working to improve their lives with worthwhile projects and infrastructure.

He further disclosed that all his political appointees are indigenes of the state which according to him is a move to stop the use of “imported” politicians as political office holders.

Governor Oyetola’s predecessor, Rauf Aregbesola worked with commissioners and aides who were from Lagos and other parts of the country.

Mad People Have Taken Over Nigerian Politics, It’s The Only Country Where The Worst Is Leading – Peter Obi | Aproko Nation