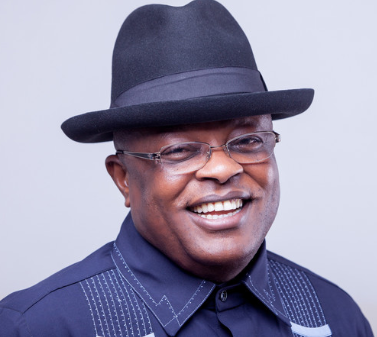 Governor David Umahi of Ebonyi has said that he became a billionaire at 25 years of age due to hardwork and commitment to duties.

Umahi who made the declaration while interacting with leaders of Abakpa main market Abakaliki, debunked social media reports that he owned shops at the market and built his house under a year.

“I work very hard, am not a poor person but a very, very rich person.

“You can’t use the state’s money and still do all these things (projects) we are doing, I don’t have any shop or any interest in the market.

The governor noted that the rescind on some decisions taken over the relocation of the traders was due to the intervention of the Christian Association of Nigeria (CAN) as the government will do anything CAN asks it to do.

“People that are accusing that CAN collected money, I pity them so much because they are on their way to hell fire.

“The CAN and I have no interest other than the peace of the state and to honour CAN being representatives of God, I could had entered the market with bulldozer,” he said.

He announced that henceforth, the Abakpa market will be designated and called Ebonyi Fruits and Vegetable market.

“We presently have a special  assistant on the market, the structures that are still strong are going to be renovated.

“The traders have two options: it is either you renovate it to our taste and become landlords or we do it on our own and you are no longer the landlord .

Umahi also announced that due to the intervention of CAN, the government has changed the date of the trader’s relocation to the state’s international market to Jan.10, 2020 instead of the original Oct.15, 2019.

He also ordered that some of the shops that were hitherto sealed in the market but re-opened, be re-sealed due to the owners reluctance to withdraw their lawsuits against the government in court.

“The same applies to the such traders at the building materials market as we will enter into appearance with those who took us to court,” he said.

Rev.Fr Abraham Nwali, Chairman of CAN in the state, thanked the governor for his magnanimity in extending the relocation date, stating that CAN will ensure the amicable resolution of the issue.

Nwali who is also the governor’s Senior Special Adviser (SSA) on Religion and Welfare Matters noted that the traders’ withdrawal of the their lawsuits will be in the overall interest.

The traders had been having a running battle with the state government over their relocation to the state’s international market.

All African countries are corrupt – Osinbajo